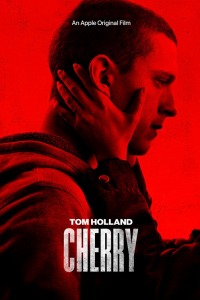 Between 2014 and 2019, the Russo brothers directed four Marvel movies with a combined worldwide box-office of over six billion dollars, so for their first foray from the world of super heroes and magic space gems, the brothers had carte blanche to pick whatever project they desired and Cherry was it. Watching all 140 minutes of this true-life tale, you get the feeling it’s less a story about loss and redemption and more an overly extended excuse for Joe and Anthony Russo to use every stylistic trick they’ve ever wanted to employ to make their own inferior Goodfellas (or Casino). Free of MCU oversight, these guys are practically going full Tony Scott or Darren Aronofsky with the multitude of their visuals tricks and gimmicks. We’re talking different aspect ratios, color washes and spotlights, heightened fade outs, fourth wall breaks and freeze frames, chapter titles complete with prologue and epilogue, in-your-face subtitles, tracking shots, and even oblique angles such as a point of view from inside Tom Holland’s inspected rectum. Cherry is aggressively flashy to compensate for how little substance there is with its story and humdrum characters. It’s based on a true story about Nico Walker (Holland), an Iraq War veteran coming back to Ohio, getting hooked on drugs, and resorting to robbing banks The trauma of his war experiences leads him to seek help and the system fails him and pushes opioids on him, turning him into another addict among too many who is desperate to do anything for cash. On paper, that sounds like it would be interesting, and the shocking part is that for all these identifiable dramatic elements and stylistic flourishes, Cherry is kind of dull. Everything feels like it’s kept at a surface-only level. Walker is just not that interesting even though interesting things happen to him. You would think it’s about PTSD, the opioid crisis, economic anxiety, and while these elements are present they are not really explored with any sustained nuance or theme. The level of social commentary stops at Fight Club-level snarky sight gags, like the names of the banks being “The Bank” and “Shitty Bank.” There’s too much bloat with the plot and running time. By far the most interesting section of the movie was his descent into addiction and the criminal excursion, but Walker doesn’t even exit the war until over an hour in. We did not need all the fluff before the war to properly set up this limited character. The real drama of the movie is post-war, and there’s an hour of setup that could have been cleaved away. You leave this stuff in as “texture” if you’re building something rich in atmosphere and character but I can only tell you what has happened to Walker externally. He’s perfectly unremarkable. The movie is too shallow for its own possible ambitions, and it ultimately feels like cribbed notes and homages to other movies the Russos enjoyed, like Goodfellas or Requiem for a Dream or Boogie Nights. It only reminds you of other, better movies, and one I was reminded of was Roger Avary’s Rules of Attraction. I appreciated the flash and style of that 2002 movie because it was about empty characters living empty lives striving for something they were incapable of, so the excessive and prioritized visual artifice worked. With Cherry, the visual trickery is distraction from the underwritten characters who the movie very much wants us to see favorably through their struggles. I enjoy Holland (Spider-Man: Far From Home) as an actor immensely but he is miscast here. He’s too boyish and charming and genial to ably perform dark and gritty antiheroes. You sense he’s eager to try these “darker roles” to prove himself but he doesn’t need to. Ciaria Bravo (Wayne) plays the girlfriend/infatuation object/junkie partner and she looks so young that see feels like an unsupervised child onscreen. Maybe that works with her as a symbol of innocence. Cherry is a movie that left me indifferent and shrugging throughout all its excesses and meandering. It feels like a movie the Russos needed to get out of their system, one of creative indulgence charging into familiar territory when more restraint, nuance, and contemplation would have sufficed, and maybe their next movie will be more mature and fulfilling and worthy of 140 minutes.