The beauty of Tom Green (if you’ll cal it such) works in the realm of television. His bizarre humor and meddling nuisance on the streets worked in a “Can’t believe he’s doing this” way. He thrives in this environment where he can wreck havoc amongst the unknowing. Take him out of this environment into a scripted venture where people are acting against him, and the reality is killed along with why it was funny in the first place. It’s not so much funny that Tom Green can hump dead animals on camera, it’s so much funny that he’ll do it in front of bystanders.

As it stands, Freddy Got Fingered is plot-less. It is basically Green doing one weird and bizarre antic after another with little relation to anything. It’s basically a meandering mess, almost like an abstract artist’s work if that artist were insane. Freddy Got Fingered is Green’s attempt at cinematic gross-out stardom. Sure, he does things that would be considered in poor taste but they are scripted and lose their appeal. Green guts an animal and wears its skin like a poncho, he bites the umbilical cord of a birth, he even eroticises a horse and aids in its… release. But all the charm is gone when it’s Green just doing zany things in a closed environment. What is the fun of seeing people do scripted reactions to Green’s antics? He needs to be in the real world, he needs to piss people off, he NEEDS reality. A movie will do no justice to Tom Green and this one surely does not.

The tale of Blow follows a kid named George Jung (Johnny Depp) as he travels to the sunshiny coasts of California. Here he finds everyone with a David Cassidy haircut and an insatiable appetite for pot. He strikes a small scale dealing business with some help from a flamboyant hair dresser (Paul Rubens) and rocket in riches. They eventually discover the powers of cocaine, a.k.a. blow to the uninitiated, and set it loose upon 1970s America. Jung becomes the top trafficker of cocaine and practically single-handily leads to its explosion. And of course, these good times can’t last as Jung’s life falls apart as the 80s go. 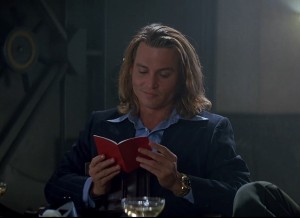 Blow is too stylistically similar to earlier 70s epics of violence and music like Boogie Nights and Goodfellas. The same moves and looks are evident, even the same overall tone, but it is missing all of the feel. Blow moves along and feels like something is missing as it continues to ape the flavor of those earlier excellent films. There’s a distinct feeling while viewing that you aren’t viewing something complete. The sense of loss permeates the screen with Blow.

Depp uses a subtle acting approach making Jung one real mellow dude man. One can never feel a connection for any of the characters because the plot is not interested in the characters and only a masochistic orchestra of bad events that happens to Depp. You feel unattached to the characters as a whole, but you do manage to feel a level of sympathy for Jung. His mother is a card to watch, and it seems history repeats itself when it comes to family squabbles.

Penelope Cruz plays one spoiled hell-cat of a drug lord’s girl, who later becomes Depp’s wife. Cruz’s character is possibly the most horrible love interest I have ever seen on film. She shrieks about money and wealth, acts apathetic to their innocent daughter, and single-handily gets Depp busted a few times without guilt. Upon deeper reflection she seems (if she happened not to actually exist, which she does) like a cheap foil to make the audience sympathy sway dramatically to our “tryin’ to do good” flawed hero in Jung. It almost seems insulting. 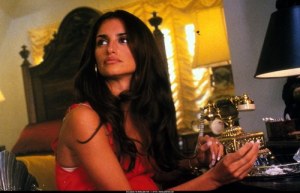 Ray Liotta (who was IN Goodfellas by the way) gets the pleasure of aging through the years with makeup, which basically consists of slapping gray and more skin to his neck. It’s rather humorous that Liotta is playing Depp’s father in the flick when in reality they are roughly the same age. Though I guess it’s better for Liotta to age after seeing Depp’s character age drastically and gain twenty pounds all in his neck. Older Depp looks like a zombie Ludwig von Beethoven.

Blow is written and directed by Ted Demme and is based on the memoirs of Jung while in prison. It is fairly entertaining in its own right but you can’t help but feel you’ve seen it all before and better. Still, with this lackluster year as it is Blow is a decent pic to sit down and chew through a box of overpriced popcorn. Any movie with Franka Potente (my titular hero in Run Lola Run) and Paul Ruebens is worth the price of admission. 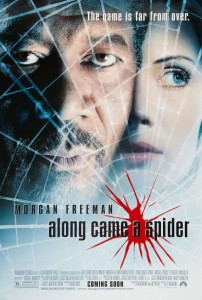 Anybody not tired of the serial killer genre yet? To that one out of the millions who raised their hand in the far back – you’re in luck! Enjoy Kiss the Girls? That same one in the back is even more fortunate. Here comes Along Came a Spider and its banality will knock you off any tuffet. Is that a word even used anymore? Spider is a continuation of the characters in Kiss the Girls (even though Spider was written before Girls). Morgan Freeman returns as Alex Cross, a hard-nosed police detective and best-selling novelist on criminal profiling. He’s suffering from Cliffhanger syndrome: the amassing of guilt from seeing someone close die in the line of duty and blaming themselves for it. See Morgan lost a female partner in a botched sting that opens the film with the worst CGI scene I’ve ever seen. He has a scene of regret then moves on to the case at hand, only to inevitably have the situation come up again and be the test of his nerves. It’s all standard cliche.

The crime that draws all our characters in revolves around the kidnapping of a Senator’s daughter at a lofty private school in Washington D.C. This is no serial killer movie, no, it’s a kidnap movie. Whatever the crime this flick centers on it still follows the superfluous serial killer movie rules to a grizzled T. 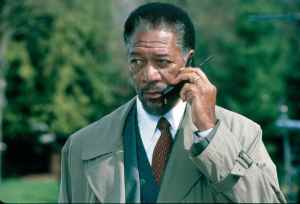 Monica Potter plays a Secret Service agent assigned to protect the girl who becomes involved with the case with her extensive knowledge of the kidnapper, Professor Sonje (Michael Wincott). Potter has previously been seen as the sad wife in Con Air, the dead chick in Patch Adams, and the girl who stars next to the guy whose acting is all about flat-lining in Head Over Heels. So in these terms Along Came a Spider is a step up. Her character is pedestrian and un-involved. She has no edge or depth and every time she’s on screen.

Freeman, God love him, needs to start learning how to say “no” to any serial killer (kidnap film) offered to him. He’s a great actor but the Alex Cross solves killers (kidnappers) franchise isn’t one to tie his rope around. Freeman does his best and brightens the film when it sags, but even he can’t save it. And his Executive Producer credit seems all the more ominous.

Naturally, an audience is left to disbelieve some of the absurdities of the genre but Along Came a Spider piles them too high and too fast to disbelieve. The kidnapper disguises himself as a plump British history teacher for a whole two YEARS in preparation for his act. Two years?! What would happen if she ever transferred? The worst part is his name – Sonje. Every time I hear the name it makes me giggle a bit. I cannot take anything seriously when the bad guy is named Sonje (“We’ll do whatever you want Sonje, just don’t harm the girl!”). Sprinkle unintentional laughter throughout. And for kidnappers and criminals these have got to be the dumbest since Colonel Klink. There is a scene where the kidnapper gives the detained child a meal… with a fork and knife! It’s like going to a prison and giving certain members scissors and leaving them alone for two hours. 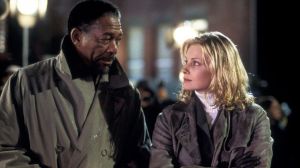 If you are having a serial whatever movie you must make your serial whatever man intriguing or turn the flick into a guessing game until the end credits. The serial killer (I’m saying this now because he does kill multiple people – so there!) in Along Came a Spider is bland as can be, despite the wonderfully rich and venomous voice of Wincott. How as an audience are we to be enthralled with a whiny adversary that bores us?

There are numerous other head-smacking absurdities. Like when our ace Morgan Freeman looks to a computer belonging to a suspect and instantly remembers an off-hand remark in one conversation that of course is the password. And he even spells it correctly with an inclusion of a symbol!

The movie is based on James Patterson’s novels all seeming to have nursery rhyme style titles. Directed by Lee Tamahori (Mullholland Falls, The Edge), it has moments of briskness that at least keep the pacing alive. On its whole the film still does not work. It feels like reheated serial killer (kidnapper) movie just out of a Tupperware container. Along Came a Spider is nothing new, nothing different, and nothing truly entertaining. Pray for Morgan Freeman please.