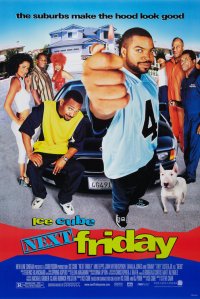 In 1995 people were cheering for a small movie then making waves on video about shiftless lay-abouts and an interesting weekend they have. No, it wasn’t Weekend at Bernie’s 2, it was Ice Cube’s collaboration with director F. Gary Grey on the urban comedy Friday. Now five years later, Next Friday takes off where last Friday was, and thus is now this Friday. Confused? You won’t be as soon as the opening credits hit.

Ice Cube brings everything to the table with his sequel to the surprise 1995 hit original — as chief actor, producer, writer, and even casting assistant. Word. Cube (that’s Mr. Cube to you) lays on the charm and brings together an amusing supporting cast with him to suburbia. Together they wreak havoc and smoke marijuana. The plot has as much substance as a New York City dime bag, but that’s all Cube needs to assemble for himself a vulgar, stupid, but funny picture.

Believe it or not, there are sporadic moments of inspired comedy, but they get lost in a cloud of pot smoke and crassness. The thinly plotted story is stretched to its limit at 93 minutes, leaving room for lots of vulgar humor — but, I did laugh. The shame is that Next Friday relies on tired, if not offensive, stereotypes as sources for comedy.

Next Friday lacks the dumb charm of its predecessor, and Chris Tucker’s motor mouth is missed most, but at its best Next Friday is disposable fun. Something tells me I would’ve enjoyed the movie more if I were stoned while watching. But then again the same probably holds true for all movies. 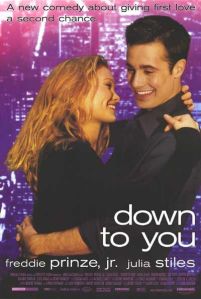 The latest sacrifice to almighty gods that are the teenage market with wide pockets arrives and proves not only is the teen comedy dying, it is having its grave danced upon. And with eight inch heels worn by the fiend known as Down To You.

The movie is very uninteresting and rather pointless as it drones on. Freddie Prinze Jr. can smile all he wants to but I’ll still never believe he’s a down on his luck college coed. At least he’s out of high school in this one. Everything in this movie has a recycled feel to it, so much so that some environmentalist group should confiscate this entire movie. People, it’s that bad. Imagine every cliché, expanded character stereotype, redundant joke, and you still have no idea how bad this script is. What the writer/director believes is quirky and cute falls closer to annoying and irresponsible.

The rest of the actors are faceless unknowns that you might as well search for on the back of a milk carton. Julia Stiles and Freddie Prinze Jr. have zero chemistry between them and are either bickering or blushing in embarrassment. Doesn’t sound like a good relationship worth a dozen flashbacks to me. Stiles at least puts forth an effort but Prinze just runs through the motions of another teen flick for his resume and comes off as nothing more than a mannequin with a goofy grin.

I stand and make a plea; please for the love of God end this Hollywood fascination with high school romantic comedies. It might have been cute to start out with but this trend has run its course. The only way the madness of teen romantic comedies will end is if the teens themselves stop supporting them. Wise up America. Take action! If this comedy is supposed to be about the school of life I’d say it overslept its class. 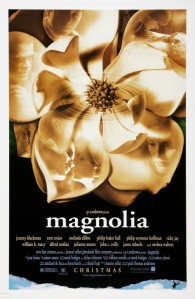