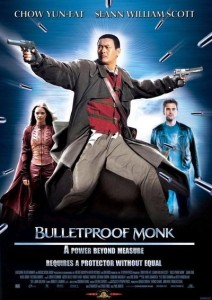 This is one of the dumbest movies you will ever see. I don’t mean to sound overly sensational or alarmist, but this is the honest truth if you sit and watch all of Bulletproof Monk. Item #1: The bad guys in the film are –get this– the grandchildren of Nazis. Yes, that’s right, Nazis. We had to have Nazis as the bad guys. There’s actually a scene where a blonde-haired blue-eyed grand daughter wheels her decrepit Nazi grandpa around. Oh yeah, and one of the Nazis runs the –get this– Museum of tolerance. Oh stop it, you’re killing me. Item #2: The titular monk (Chow-Yun Fat, pray for him) recruits pick-pocket Kar (Seann William Scott) to be his apprentice. Kar is an idiot. The Monk doesn’t help. His big mystery is –get this– why hot dogs and hot dog buns come in different numbers? Man, haven’t heard that one since the third grade. I could swear the screenwriters of this are third graders. That would heartily explain why a character is called “Mr. Funktastic.” Item 3#: The monk teaches in stupid opposite talk (“You cannot be free until you have been taken. You cannot be cold until you are hot. You cannot die until you have lived,” you try some). One of the monk’s lessons is that the laws of physics, mind you the LAWS of physics, can be bent just by putting your mind to it. He says gravity can be overcome if you just don’t believe in it. This is insane. At least in The Matrix it had some plausibility. Item #4: The movie is a complete rip-off of The Matrix. I’m not just talking style, no, I’m talking everything. There is a scene where the monk and Kar run through a street and building, defying gravity, being chased by men in suits and sunglasses, and they get to a roof where they must combat a helicopter. What movie does this sound like, hmmm? Item #5: The visual effects are done by –get this– Burt Ward’s effects house. Yes, that’s right, the guy who played Robin on the campy 60s Batman show has an effects company. And they did the horrible work on Bulletproof Monk. This movie is so terrible at every level of filmmaking that it becomes enjoyable to watch, in the same vein as 2001’s stinker Dungeons and Dragons. I defy anyone to find merit in any of it. Sometimes you have to wonder what Hollywood was thinking.

Colin Farrel is fast becoming the Hollywood It-boy, if he hasn’t achieved the title already. It’s hard not to agree. I’ve seen several interviews and this Irish bad boy is just so incredibly damn charming that you want to invite him to your house. He’s got that cocky grin and those eyebrows that look like they’ve been knitted. The man oozes charisma and stardom. So enough of that, let’s talk a little about the film. About 90% of the film takes place within the four walls of a phone booth, but it’s not as dull as one would expect. One reason is because of Farrel, even if his New Yawk accent can be a little grating on the ears at times. Another reason is because a sniper, with the honeyed voice of one Keifer Sutherland, has trained a rifle onto Farrel, and if he moves hes dead. Though the motivations for the sniper are quite murky, and some late revelations feel too telegraphed and forced. Director Joel Schumacher (he who destroyed the Batman franchise) delivers a mostly solid and taut thriller. Schumacher tries shoehorning in some visual flourishes with minute split-screens and some stupid statistics about phones. But, and I dont think I’m alone here, I’d have no problem spending about 80 minutes with Farrel.