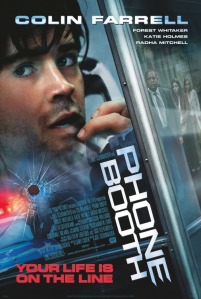 Colin Farrel is fast becoming the Hollywood It-boy, if he hasn’t achieved the title already. It’s hard not to agree. I’ve seen several interviews and this Irish bad boy is just so incredibly damn charming that you want to invite him to your house. He’s got that cocky grin and those eyebrows that look like they’ve been knitted. The man oozes charisma and stardom. So enough of that, let’s talk a little about the film. About 90% of the film takes place within the four walls of a phone booth, but it’s not as dull as one would expect. One reason is because of Farrel, even if his New Yawk accent can be a little grating on the ears at times. Another reason is because a sniper, with the honeyed voice of one Keifer Sutherland, has trained a rifle onto Farrel, and if he moves hes dead. Though the motivations for the sniper are quite murky, and some late revelations feel too telegraphed and forced. Director Joel Schumacher (he who destroyed the Batman franchise) delivers a mostly solid and taut thriller. Schumacher tries shoehorning in some visual flourishes with minute split-screens and some stupid statistics about phones. But, and I dont think I’m alone here, I’d have no problem spending about 80 minutes with Farrel.