I knew about 15 minutes in that The Core was not going to take its science too seriously. Aaron Eckhart, as a hunky science professor, is addressing military generals and essentially says, “We broke the Earth.” He tells them that because the Earth no longer spins (don’t think about it, you’ll only hurt yourself) the electromagnetic shield will dissipate and the sun will cook our planet. And just to make sure people understand the term “cook” he sets a peach on fire as an example. At this point I knew The Core was going to be a ridiculous disaster flick with its tongue firmly planted in its cheek.

Earth’s core has stopped spinning and horrific disasters are starting to be unleashed with anything from drunken bird attacks to lightening strikes in Rome. I always love how in disaster films Mother Nature always instinctively goes after the monuments, the landmarks, the things of cultural importance. The United States government hires a ragtag group of scientists and NASA pilots to journey to the center of the Earth and jump-start our planet. Of course everything that can go wrong on this fantastic journey will eventually go wrong.

The Core is so improbable, so silly, that it ends up being guilty fun. If you let go, ignore the incredible amounts of birth imagery (the sperm-like ship tunneling through to get to the egg-like core), then the very game cast will take you for a fun ride.

There’s a scene where the government approaches kooky scientist Delroy Lindo to build the super-ship that will take them to said core. When asked how much he thinks it’ll cost Lindo laughs and says, ”Try fifty billion dollars.” The government responds, ”Can you take a check?” I was pleasantly reminded of an episode of Futurama where the space-time continuum is disrupted and time keeps skipping forward. The old scientist and a Harlem Globetrotter (it was a very funny episode) theorize that to create a machine to stop this problem they would need all the money on the Earth. Flash immediately to the two of them being handed a check that says, “All the money of the Earth.” Richard Nixons head, in its glass jar, then says, “Get going, you know we cant spend All the Money on the Earth every day.” 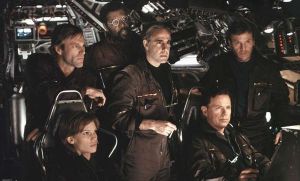 The assembled cast is quite nice. Hilary Swank assumes a leadership role quite nicely. Eckhart is suitably hunky and dashing. Stanley Tucci is very funny as an arrogant science snob. Tcheky Karyo (the poor mans Jean Reno) is … uh, French. I don’t think anyone would believe that these people were the best in their fields (only in movies are scientists not old white men but hunky and sexy fun-lovin folk).

Director Jon Amiel (Entrapment) seems to know the preposterous nature of his films proceedings and amps up the campy thrills. An impromptu landing of the space shuttle in an LA reservoir is a fantastic action set piece, yet is likely the reason the film was delayed after the Columbia crash. The cornball science and steady pacing make The Core an enjoyable, if goofy ride. The film does run out of steam and goes on for 20 minutes longer than it should.

The Core is pure escapist entertainment without a thought in its head. And in dire times of war and harsh realism blaring at us every evening, there’s nothing wrong with a little juicy escapist fair. Buy a big tub of popcorn and enjoy. Does anyone else wonder if we broke the Earth just after its 5 billion year warranty was up?