James Bond is a symbol in our popular society. He represents charm, bravery, male chauvinism, and the essence of cool. So why is this dying image seeming more like a dinosaur than a hero? The World Is Not Enough, the latest installment into the longest running franchise in movie history, exhibits more of commercial feeling than an actual movie. This Thanksgiving fixin’ is overly stuffed with useless gadgets, double entendres, messy explosions, outlandish cartoon escapes, and even wooden performances. But it all doesn’t matter because it’s a James Bond movie and we know what we’re getting and we want it! But why does this helping seem less filling than those of the past?

The Bond films of recent are seeming to take a cue from the Batman flicks by thinking two are better than one. Does anyone remember fondly the days when one Pussy Galore was enough for the world? With TWINE we get double stacked with Bond girls, and this has to be the weakest crop of exotic babes yet. Sophie Marceau comes off as an arrogant whiny drama-queen twirling her pretty fingers in that bear rug Brosnan credits as a chest. She spends virtually the entire running time preening around wrapped up in a bed sheet or underneath it. Connect the dots to Denise Richards who is a nuclear scientist in her day time but a cover girl in her free time. How convenient that the finale takes place underwater and her with only a T-shirt. Is MGM this desperate for the money of teenage males?

The most depressing aspect of the Bond films of late are the hysterically preposterous and cheesy villains. In TWINE we get a scary Robert Carlyle who has a bullet lodged in his brain and allows him to withstand all pain. Great, but all he does in the flick is hold a hot rock and punch his hand through a table. If you’re going to give a villain an eccentric trait you have to play to that trait to give the dubious baddie some semblance of an advantage in a dire situation. The possibilities could have been great for Robbie but he’s utterly wasted and so is the idea.

Usually in a standard Bond flick there is at least that one “Wow” scene where you gasp as your breath is taken. that one stunt or sequence that mystifies you with excitement. There was never a “Wow” moment with TWINE but the action held its own and kept from succumbing into tedium.

TWINE may not be the best Bond, but it sure as hell is better than Tomorrow Never Dies. Its finale may be anti-climactic and cramp, but the action in this outing is regularly up to speed. It may not have the best actresses… but… but they look pretty when wet. all in all James Bond is a satisfying figure to have grace the screen every few years to revisit the same escapist domain of earlier follies. Let’s just pray they tinker with the system before we get another Tomorrow Never Dies, or worse, another Timothy Dalton. Stay with us Pierce Brosnan; the world needs you.

There is a false prejudice circulating the land of merry movie goers as they skip from one theater to the next. This assumption is that animation is a kids only event, that’s it’s something to appease the screaming masses under three feet of height. Lately movies are giving more credit to the cause that animation can be a wonderful escape and isn’t just for the kids.

Animation can take people to worlds that otherwise could not have existed, and so is true with Princess Mononoke the 1997 Japanese import with a fresh English dubbing. Mononoke speaks of the battle between harmonious nature and forging industrious man. Often the film displays such scenes of visual passion that it seems like an animated love letter to those wishing to venture out to find it. The story is vivid and non-judgmental, you see the stories and reasons behind both warring forces and not everything is easily black and white. The English dub does not distract from the overall enjoyment as many professional actors yield their vocal talents to this masterpiece. Princess Mononoke leaves a spellbinding impression of intense ecological thought and aching beauty. The best anime has to offer.

At the other end of the animation spectrum lies Toy Story 2, the kid friendly three-dimensional quest of action figures and plush dolls. What is amazing about Toy Story 2 is how it not only matches its ground breaking predecessor but even surpasses it both in visuals and story. Story is packed with sly humor not just for kids, and it contains a poignant message about mortality and what one seizes with the opportunities they are given. The animation is mesmerizing and the humor is fast and fierce. Toy Story 2 proves that not all sequels are bad ideas.

Fresh from the gate are two examples of the great gifts animation has to offer. Couple these with the wonderful The Iron Giant, a ferociously funny South Park movie, an okay Tarzan, and the upcoming Disney redux Fantasia 2000 and it appears to be a solid time for animation. Go out and see some.

Nate’s Grade: Both movies A 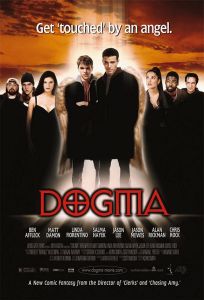 In a time where simply having faith in anything, let alone religion, is scoffed at, Kevin Smith daringly and passionately expresses his personal search for answers and understanding. But while the zealots decree Dogma as blasphemy, what they truly miss is the biggest commercial for faith and God that American audiences have seen in decades of cinema.

The story of the religious epic causing all the hubbub begins with a pair of fallen angels (Ben Affleck and Matt Damon) spurned from the pearly gates of Heaven and banished to Wisconsin. One discovers a re-dedication of a church imploring a little used Catholic practice of plenary indulgence allowing whoever to enter through the church’s arches to have their slate cleaned of all sin. The two seize this opportunity of a dogmatic loophole to sneak back into heaven. The only slight problem is that by doing so they reverse a decree of God and disprove the Almighty’s unfallability, and thus will wipe out all of existence. The voice of God (Alan Rickman) recruits a lapsed Catholic named Bethany (Linda Fiorentino) for a Holy Crusade to halt the scheming angel’s plans for the good of the universe. Along the way she is aided by two unlikely prophets (the dynamic duo of Jay and Silent Bob), an racially discredited 13th Apostle (Chris Rock), and a shapely strip-teasing muse (Salma Hayek) as they engage with demons, seraphims, angles, and all sorts of celestial “who’s who” to stop the end of existence.

Smith’s direction has taken strides since the point-and-click days of his earlier works; however, there’s still an awkward flatness to his framing and action. Fiorentino plays the role of a grounded character well. Rickman as the bitter Brit shows why he can still take anyone toe-to-toe for acting chops. Affleck and Damon have terrific chemistry together and play off one another for great comedy. Jason Mewes has never been funnier as the terminally stoned and foul mouthed Jay. Rock shows he can restrain his abrasive personality. Salma shows… well she shows she can dance. Jason Lee as an air conditioning-adoring demon and George Carlin as a used car salesman type Catholic Cardinal are so commanding in their presence and excellent in their performances that it’s a sin most of their scenes were cut during editing. Even Alanis Morrisette works as a humanly childish God. She’s given no lines but expresses great feeling and humor anyway.

Dogma is rambunctiously hilarious and a never ending joyride of fun as it jumps from jokes about demons made of excrement to “Buddy Christs” to insightful and sensitive thoughts on religion. Rarely does it bore even with the large plot it must always keep in successive movement. The only drawback Dogma suffers from is the amount of religious points it desires to make. The characters will reach a subject, chat, then directly move on to the next. The sporadic nature can easily keep an audience’s head spinning, but is brought back down to gentle rest from Smith’s Divine wit and sharp writing. Some of the opus’ many characters appear for only brief stretches as Hollywood’s A-list battle for valid screen time among each other.

Smith is not one to shy away from controversy, or his quota of sexual innuendos and profanity. But the protestors for this film attacking its vulgarity are beyond missing the point; Dogma is reaching people the church hasn’t and can’t. It may be an audacious tweaker of a flick, but ultimately it’s bringing up religion into open debate and discussion amongst the masses where there was none before. And isn’t that in itself glorifying some type of achievement?

It would do well the opponents of Dogma to venture into a darkened theater sometime to see the movie and realize it is a humorous affirmation of faith and beliefs. The story of a crisis of faith is relatable to a society too jaded and cynical. Smith’s wrestle with theology is the public’s gain, and his halo only glows a little brighter for having the courage to do so. 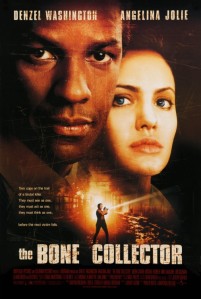 Another serial killer movie? Didn’t we as an audience learn our lesson already with Kiss the Girls? Apparently not with this latest adaption of standards and predictability that does nothing more then reinvent the old blaming the butler routine. And may I affimingly add that whoever the critic who gasped that this is on par with the masterpieces of Silence of the Lambs and Se7en either is lying through their teeth or has their children’s college education payed exclusively by Universal.

The Bone Collector has fancy gloom, grit, and gore, but it has no substance whatsoever. The script has the feel of being pasted together from leftovers of earlier better movies. It takes one illogical shift after another until the supposedly “surprise payoff” ending comes charging in but echoes more of a unified feel of rip-off instead. Contrivances are in abundance with every scene, and further prove the superiority of Lambs and Se7en in how well they achieved perfectly tuned thrills. The Bone Collector‘s biggest disappointment is in its utter lack of substantial entertainment when the core of the movie is Angelina Jolie getting dirty in dark places wielding a flash light. This kind of stuff may have worked at summer camp around the fire to scare people, but on the big screen the only ones to cower in terror will be the extensively naive.

Not to lambast this clunker too much, because there is some credible acting from the star leads. Denzel Washington at least makes his role non-laughable which is saying a lot in respect, and Jolie looks like she is a fresh talent but this ain’t her vehicle to hitch on to. Her “gifted” police specialist at finding evidence doesn’t seem to special to me with the easily found clues that anyone could trip over.

The suspense in The Bone Collector boils down to flashes of gore and jumps to frighten instead of the meticulous psychological and intense battles in Lambs and Se7en. The serial killer genre is at a glut again, and The Bone Collector is merely the fat of that over-extension that would serve best to be cut loose.