The battle sequences are shot with great suspense and visual expertise. The gore flies often, as this would be a very gory war indeed. On a personal note this movie has had the best squib hits (blood shot explosions for those who don’t know) I’ve ever seen. But the main focus isn’t the war, it’s merely a back drop for the story of a family man Benjamin Martin (Mel Gibson) avenging the death of one of his sons and being pulled into the war fighting for a purpose. Mel Gibson gives a wonderful performance as the troubled father man afraid of his past sins and what the future may bring. His thoughts are never on the enemy but on his children he loves dearly. Heath Ledger (10 Things I Hate About You) plays Gibson’s oldest son Gabriel and is the break-out star. His acting is as sharp as a bayonet and the future looks very promising for this Aussie actor.

The most necessary quality a movie must have to pull for the hero is a hissable villain, and The Patriot has a villain that will likely be the best (worst?) of the summer and possible year. Well known British stage actor Jason Isaacs gives such delight in every snarl and evil grin that Tavington, his character, exudes. You can peer into his eyes and see evil — and that’s great acting. He truly relishes his actions. With a wonderfully bad villain it only pulls more emotional heft to the story written by Saving Private Ryan‘s scibe Robert Rodat on a personal mission to pen a movie about every major American war.

The Patriot isn’t spot free, especially after a multiple tomahawk attack. Some of its characters are sloppy and the end is rather predictable and somewhat cheesy that the two men do battle as the focal point of the entire war. And you might just laugh when Gibson races back to the front of a quivering line and waving the flag to inspire the troops. There’s also many unnecessary and stupid sub-plots. Some work like Gabriel’s love story, some don’t like the one black man entering the unit to fight for his freedom met with the usual hostility.

The Patriot is a movie filled with excitement, great direction, and worthy characters. So do something for your nation and plop down seven bucks and see this movie. 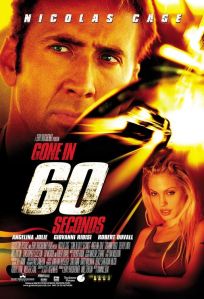 The movie I’ve seen trailers for since last summer finally hits theaters in a summer full of hungry patrons all wishing for the biggest explosion and coolest effects. But with its star heavy cast and array of sleek cars can Gone in 60 Seconds propel itself to the front of the race with audiences?

Nicolas Cage plays a reformed car thief forced back into the fray when his screw-up brother (Giovanni Ribisi) botches a deal for a local toughie. To rescue his delinquent bro Cage must steal 50 cars over the next three days for the man. So Cage wastes two days assembling his team of usual stereotype frat kids who are “the best and brightest” to aid in the mission. That leaves 24 hours for Cage and company to steal 50 cars and save the day minding any moral objections over grand theft auto.

Gone in 60 Seconds is a living dream of testosterone with fast cars, sexy girls, and colossal explosions. But all the action is mercilessly loud yet surprisingly tame and empty. All the action lacks true tension or any real semblance of excitement. The director uses poor choices of rapid quick-cut edits that dull any build up of excitement. Most of the action doesn’t even center on the theft of cars, it just happens. Excluding one chase scene toward the end Gone in 60 Seconds is a popcorn movie with no flavor.

The script and characters take a back seat toward the effects and speeding cars but this to be expected from producer Jerry Bruckheimer, the man who gave us the equally boisterous Con Air and The Rock. This time the holes of the plot are easier to see and the dialogue no less cheesy especially when car talk turn innuendous. It’s easy to argue that story should be forgotten because audiences came to see cool cars and cool crashes, but it’s also easy to argue that those cool crashes and cars are distractions (as is Angelina Jolie) from the thinly strained story. When you have time to really analyze the plot in an action film you know the action isn’t up to par.

Gone in 60 Seconds could also serve as an apt description for Angelina Jolie’s running time. The recent Oscar winner dons bleached dreads and those pouty lips but is still seen less than Waldo – and that is a criminal mistake with someone like her. Gone in 60 Seconds has a bounty of Oscar winners with scant supporting screen time yet it can’t fool the crowd.

Gone in 60 Seconds may fit the criteria for a grand summer fireworks show but can never deliver the goods. It may be flashy, loud, and fast but this flick just isn’t running on empty, it’s past the “E.”

In the year 3000-something an alien race of blue figurines known simply as the Drej pretty much obliterate Earth. There’s your starting point for a movie – a few billion deaths. The last survivors drift through the ends of the universe at the bottom of the interstellar ladder. One survivor (voiced by Matt Damon) is later visited upon by a rag-tag ship led by Korso (Bill Pullman) and the shapely purple-locked Akima (Drew Barrymore), survivors of Earth as well. They rescue Damon and inform him that in his hand he holds the key to reaching a ship his father hid long ago that could create a new home world for all the drifter humans. And the Drej don’t like this idea and will stop at nothing chasing him until they find the location of this ship, the Titan, for themselves.

Sure, the effects and painted backgrounds are nice but the animation is choppy at times and the constant rotating of sets incorporated with traditional 2-D animation rates high on the annoyance scale and only shows how the 2-D stands out even more. To learn how to mix and match these styles effectively watch The Prince of Egypt. There are some sequences that are truly visionary, most notably a cat-and-mouse chase through a cluster of gigantic reflective ice crystals. But a movie is not made or saved by one scene. 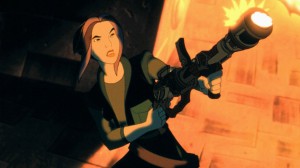 The most disappointing aspect of Titan A.E. is the flat and tired script from three incredibly talented writers I admire very much (the creator of The Tick, Joss Whedon – creator of Buffy the Vampire Slayer, and John August – writer of Go). The story owes many debts to ‘Star Wars’ but even more to ‘The Wizard of Oz’. The Drej are merely faceless pop-up bad guys with zero personality or development. They wish to destroy humanity but no explanation as to “why” is ever given. They’re clouded in lifeless ambiguities. As a result you can never really care for the heroes when you could care less about the villains.

Why is Titan A.E. rated PG? Well despite its lack of fear to show some blood, and gun shots for that matter, it features the animated posterior of Damon with some light sexual banter that will thankfully fly over most kids’ heads. A quibble of mine is for equal opportunity for animated nudity. If I can see a cartoon male ass in a PG-flick, or on prime time television even, why must female nudity be slapped with an R? Let’s erase this gender double standard and let all sexes be equal under one animated nudity.

Titan A.E. may have the look but it never can maintain the feel of good sci-fi. Often times it’s either heavy-handed or overly dull. Everything is “been there, done that” but set to a non-stop playing of a soundtrack that just keeps screaming “BUY ME! BUY ME! BUY ME!” For those hoping for Disney to take its stranglehold off animation and entertainment, this picture isn’t your fabled messiah. You’ll have to wait… again. 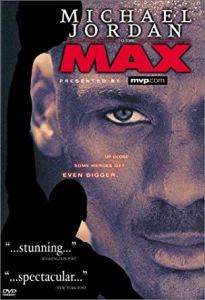 IMAX’s next trip is an NBA’s dream of promotion but also an indication of what exactly they’re missing — that is a basketball God. Jordan to the MAX is basically a pat documentary featuring Jordan’s upbringing and his dreams. It’s all the typical uplifting never-stop-trying stuff that’s routinely handed out to the kids. What makes this documentary worthwhile though is the format it’s presented in. Seeing Jordan do his numerous acrobatics in slow-mo on IMAX’s 50-foot screen makes him seem even more immortal then he already is considered to be. You can see the grace and overwhelming talent he possesses in every flexing of muscle and bead of sweat. It’s quite impressive and worth the remaining dull moments.