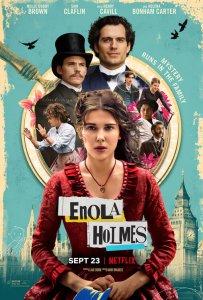 I’m shocked this isn’t the pilot for a new series, and maybe it one day will serve as such, because Enola Holmes is such a sprightly, effervescent, enjoyable rehash of the classic sleuth but this time from the girl power point of view of a younger sister. Millie Bobby Brown (Stranger Things) shines as the headstrong, quirky, loquacious Enola Holmes setting off on her own adventure to find her missing mother (Helena Bonham Carter) and to push against her older brothers Mycroft (Sam Claflin) and Sherlock (Henry Cavill) and their perceptions of what is appropriate for a lady. The best moments are when Brown gets to showcase her pluck and grit, proving presumptions wrong, and winning fans along the way. There is nothing new about this kind of movie where a young woman fights against sexism and proves herself capable and heroic. It’s a tried-and-true formula that works because, with enough polish, an underdog is always going to draw in the audience to watch them triumph over their doubters. Add a dash of feminism to boot and bake as necessary (not a joke on feminism, mind you). The actual plot is secondary to the situational mishaps and character bickering, which is good because there isn’t really a mystery to uncover. Enola gets pulled into protecting a young royal on the run from a wealthy family benefactor that wants to make sure he doesn’t live to collect his inheritance. Their interaction adopts a screwball romance sort of tone, which provides Brown ample opportunity to be sunny, exuberant, and overall delightful, a side rarely seen as the somber, alienated Eleven. I enjoyed the stylistic asides and visual inserts to better showcase Enola’s hyperactive thinking and sleuthing, borrowing a page from the new Benedict Cumberbatch Sherlock TV series to visualize the processes of rapid-fire thought in a pleasing and amusing manner. Cavill is perhaps the most dashing Sherlock put to screen and provides a suitable establishment stand-in of accepted masculinity and intelligence that serves as contrast for what Enola is pushing against. Given that almost all the main players are attached to ongoing Netflix series (The Witcher, The Crown) I feel like we should expect more adventures down the line with the irascible Enola Holmes, and with a bubbly Brown seizing the mantle, that’s fine by me.