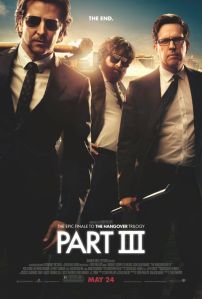 I was no huge fan of the first Hangover movie and I cited its 2011 sequel, a carbon copy of the original, as one of the worst films of the year. The supposed final chapter ditches the blackout formula, which on its face seems like a step in the right direction, but now we have a Hangover movie with no titular hangover and at heart this is a movie for no one, even hardcore Hangover fans. I became quite cognizant how little I was laughing, not just because the jokes were badly misfiring, which they were, but also because there were so few jokes. You’d be hard-pressed to label this a comedy. It’s really more of an action thriller. What humor does arise is usually mean-spirited, curdled, or just off-putting, particular the reoccurring theme of animal cruelty (maybe opening your film with a decapitated giraffe is not the best idea). The other major hurdle is that annoying supporting characters played by Ken Jeong and Zach Galifianakis are elevated to co-leads. Both of these characters are best when reacting to others rather than being the main actors in the story. This movie is so abysmal as a comedy that you start to think director Todd Phillips should try his hand at a straight action thriller; the guy has a strong eye for visual composition. The actors all look extremely bored. Could Justin Bartha, the character who always gets sidelined, just get murdered and they have to hide his body? Oh no, I think I just came up with The Hangover 4. I apologize already.