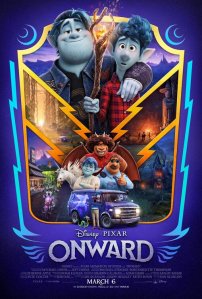 In a modern fantasy suburbia, Ian Lightfoot (voiced by Tom Holland) and older brother Barley (Chris Pratt) have been gifted with a magic staff from their long-departed father. Barley was only a young child when their father died, and Ian never knew him, and now both are granted an opportunity via magic to bring their dear old man back for one more day. The magic spell is interrupted and, as a result, only one half of their father is brought back to life, the lower half, chiefly his legs. The boys must travel on an epic quest in order to bring the rest of their father back to life before all of him disappears again.

Onward is the first time Pixar has ventured into a fantasy realm and the mixture of the modern with the high-fantasy setting allows for some fun juxtaposition. The teenage worries about fitting in, testing your boundaries, and finding out your sense of self can be very relatable, even in a world of trolls and elves. I enjoyed the combative and compassionate brotherly dynamic between Ian and Barley, and Holland (Spider-Man: Far From Home) and Pratt (Avengers: Endgame) are terrific together and really do feel like feuding family members. Their high energy performances translate well to animation. The Pixar creative team does enough to provide little distinguishing character touches for both, enough to provide some extra shading so they don’t quite feel like cartoon versions of their more famous Marvel counterparts. Ian is all awkward and lacking in confidence whereas Barley is overloaded with self-confidence and an unshakable sense of arrested development. I enjoyed the small number of memories relating to their father that Barley holds onto, and I enjoyed how Ian listens to a brief, ordinary test recording of his father on a cassette tape and creates a dialogue between father and son. It’s such a sweet moment that also demonstrates Ian’s ache. I enjoyed how the screenplay connects the external to the internal, namely the obstacles on this quest to the personal trials for Ian and Barley. It allows more meaningful payoffs and more rewarding character growth for our duo. I enjoyed spending time with both boys and was glad their quest was more about them than magical ephemera. 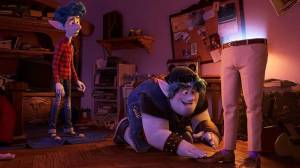 Amazingly, what works best in this movie is its emotional core, which sounds slightly bizarre considering it’s a road trip with a pair of legs. As Onward progresses and settles down with its better honed second half, it puts more emphasis on the relationship between the brothers, their hopes and worries for one another, their sacrifices and shames, and ultimately it becomes a movie about two boys trying to find closure with the memory of their dearly departed dad. The genuine emotion of the brothers is enough to pave over most of the undeveloped elements of the world and storytelling (more on that below). I would have thought, going in, that Onward would present a so-so story with an intriguing world of possibility. I’m surprised that my experience was the exact opposite. The story and central relationships are what kept me going, and it’s what ultimately earned some teary eyed responses from me late in the movie. The topic of seeking closure is a personal one for me and something I value highly, so it was very easy for me to plug my own yearning and vulnerability into these characters. They’re going through all this dangerous trouble not just to see their departed father one last time but also to say goodbye, and that got me big time. It gave the entire movie a new weight that I wasn’t expecting. Who wouldn’t want another chance to tell a loved one how much they miss and appreciate them?

The whole concept of being stuck with a loved one’s lower torso allowed me many moments of contemplation. First, I wondered what their father must be going through to only experience the world through his legs. It felt limited. How do you communicate to others? The film finds its ways. How do you express emotions simply from a pair of disembodied legs? The film finds its ways. As Ian and Barley drag him along on a zipline leash, I kept thinking about the dad. What is he thinking in this moment? Is he waiting for some kind of comforting confirmation from his sons to tell him where he is and what is happening? I kept thinking how confused he must be. To the filmmakers’ credit, they don’t ever emphasize the potential hell of this half-existence. He’s presented often as a figure of comic relief, especially as his upper torso pile of clothes sloshes around and tumbles off. In a way, the pair of legs reminded me of the visual metaphor of the floating house in 2009’s Up, the manifestation of the protagonist’s heavy grief. They’re tethered to this half-formed memory of their father, unable to fully interact with him and let him go. I was worried that Onward was going to be the Pixar equivalent of Weekend at Bernie’s and it is not.

There are some issues with the movie, nothing major, but enough to make it feel under developed, especially in comparison to the Pixar movies of past. The imagination is there, however, the world-building of this fantasy world is decidedly lacking. There are some cute asides like unicorns as the equivalent of trash-eating raccoons, but as a whole the fantasy world feels underdeveloped to its full potential. There’s a significant story point where the current world has forgotten its magic roots thanks to the ease of technology and its inoculating effects, which seems like a pretty straightforward message for our own lazy world. Again, though, Onward doesn’t dig deeper into this theme or what it could mean for the larger mythology of its own world and its history and the rules governing its magical creatures. I started to wonder whether Pixar could just have set this story anywhere.

Likewise, the supporting characters don’t amount to much and feel like leftovers from earlier drafts where they had richer involvement. The ongoing subplot with their mother (Julia Louis-Dreyfus) teaming up with the fabled beast-turned small business owner Manticore (Octavia Spencer) offered little other than occasional exposition. The Manticore is supposed to best represent how the new world has traded its culture and history for comforts and safety, but it’s not clearly realized and integrated. My pal Ben Bailey reflected that the Manticore seemed like a one-scene character that the filmmakers didn’t want to drop, and so she was stretched through the rest of the film to diminished returns. The last act has a sudden and arbitrary monster to defeat that feels like the kind of thing expected in these sorts of movies, which is a rarity for Pixar and thus a slight disappointment.

Lastly, much of the humor just doesn’t work. The jokes can be stale, safe, or one-note, like a team of very tiny pixie bikers. It’s often silly without exactly being clever. There’s more fleeting visual humor with the incongruous nature of fantasy in a modern setting. There’s less slapstick than you would think considering one of the main characters lacks a torso. I chuckled a few times but, much like the fantasy setting, felt the humor was kept at an superficial level of thought.

Onward isn’t top-tier Pixar but it’s a solid mid-tier entry, an enjoyable adventure with a resonant emotional core that makes me forgive many of the film’s other aspects that don’t quite work. The brothers are the best part, their interactions are the most interesting, and their heartfelt journey and hopeful desire for closure is what ultimately left me emotionally satisfied. The jokes and world and supporting characters don’t feel as developed, but it hits with its core relationship and its emotional center, so Onward works where it counts the most with its storytelling. Mid-tier Pixar is much like mid-tier pizza — still satisfying and better than a lot of other options.