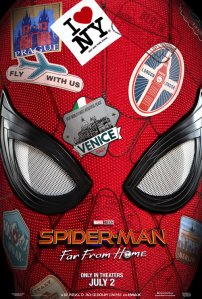 Spider-Man: Far From Home arrives as the tasty dessert to the epic five-course meal that was Avengers: Endgame. It picks up weeks after the events of the climactic chapter, starting right away with the consequences in a clever, albeit light manner. Peter Parker (Tom Holland) is excited to go on a class trip to Europe and has big plans to confess his true feelings to his crush, MJ (Zendaya). He’s pulled into hero work by a testy Nick Fury (Samuel L. Jackson) who needs Spider-Man to stop a group of inter-dimensional elemental monsters. Quentin Beck (Jake Gyllenhaal), dubbed “Mysterio” by the Italian media, is the last survivor of that other dimension and looking for assistance to thwart them and save this Earth. Peter tries to live a “normal life” and balance his superhero duties, but his secret life is increasingly intruding upon his actual life, especially as the world looks for the next superhero to step up in the absence of Tony Stark. Far From Home is an enjoyable road trip movie that feels like Junior Spy Hijinks for the first half. It’s funny but I definitely felt like the filmmakers weren’t fully engaged in telling that story, so I was left a tad disengaged. There’s a big reason for this and it’s a turn that comes halfway through, and from there out the movie is mostly great. The action sequences are directed with flair and even better visual acuity by returning director John Watts (Cop Car), there are some vivid nightmarish hallucinations that are glorious and disorientating. Gyllenhaal (Nightcralwer) becomes much more interesting in the second half and makes better use of the actor’s comic and dramatic range. It almost feels like some of the staid back-story from the first half is a satirical point of the second half, but you have to get through it all first. This bait-and-switch storytelling structure leads to certain pluses and minuses, and had it gone on much longer it would have more negatively affected the overall enjoyment factor. The first post-credit scene is definitely a game-changer in the world of Spider-Man and has a fantastic character debut that made me cheer and will be big especially for fans of the recent hit PS4 game. Far From Home doesn’t have the polish and brilliant structure of 2017’s Spider-Man: Homecoming but it’s a Spidey sequel that doesn’t lose track of the characters, presents an interesting villain as something we haven’t quite seen before, and has a good sense of humor while still being able to thrill and chill. The MCU is in a different world now after Endgame and with Holland and company leading the way, I could use more of this Spider-Man pronto.