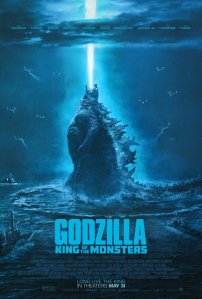 Godzilla: King of the Monsters is the sequel to 2014’s American re-launch, and the biggest complaint I had with that other film was how frustratingly coy it was with showing Godzilla. I wanted more Godzilla in my Godzilla movie, and King of the Monsters at least understands this need and supplies many of the most famous kaiju in the franchise, like Mothra, Rodan, and the three-headed King Ghidorah. The human drama is just as boring with characters I have a hard time caring about. Vera Farmiga plays a scientist who lost a child during the 2014 monster brawl in San Francisco. She develops a sonar device to communicate and domesticate the giant monsters (now totaling 17 plus). She and her teen daughter (Millie Bobby Brown) are kidnapped by eco terrorists that want to… destroy the world and leave it back to the ancient monsters? It’s a bit jumbled. I felt more for a monster than I did any living person. The plot does just enough to fill in time between the monster battles, which can be fun but are also lacking a few key items. Firstly, the sense of scale is lost. That’s one thing the 2014 film had in spades, the human-sized perspective of how enormous these beasts are. Also the fight scenes are shot in pretty dark environments that can make things harder to watch. There is a simple pleasure watching two giant monsters duke it out on screen, and King of the Monsters has enough of these to satisfy. It’s still a flawed monster mash but at least it sheathes the itch it was designed for, and if you’re a Godzilla fan and feeling generous, that might be enough to justify a matinee with a few of your favorite fifty-story pals.