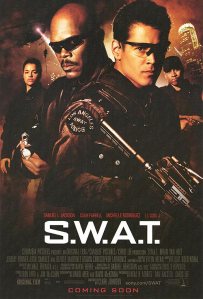 Hey, I got an idea, let’s spend 2/3 of our movie building characters no one cares about, and then we’ll let something action-y happen in the last act? What could possibly go wrong? I got an even better idea, let’s bring along Michelle Rodriguez as a, get this, tough girl cop. Oh yeah, and we need some Samuel L. Jackson too. And let’s have the bad guy be French, since no one likes them right now anyway. Brilliant.