Let there be no question, while baseball may still cling to the title of “America’s sport,” the real king in the realm of sports is football. The NFL has grown by leaps and bounds and dominated American culture, to the point that the NFL Draft is an event that millions more watch than actual games in other sports. In some way the Draft is the most optimistic day in football, where every professional team thinks they’ve found the missing pieces to make that championship run, that their draft picks will all pan out. It’s a rare day where even the Cleveland Browns can be optimistic. There’s also been a shift with the fans. Decades ago, most people would fantasize about being an NFL head coach; nowadays, in the age of number-crunching and fantasy football, most people would prefer being an NFL general manager (GM), assembling their dream team. The landscape is ready for a film like Draft Day, but will the fans turn out for a fictional outing?

Sony Weaver Jr. (Kevin Costner) is the GM for the Cleveland Browns and he’s put the team’s future all on the line. He’s traded draft picks with the Seattle Seahawks, jumping from number seven to number one. Everyone assume that Wisconsin quarterback Bo Callahan (Josh Pence) is the consensus number one. Sonny has traded his team’s first round draft picks for the next three years in order to make this move. Now, with less than twelve hours remaining before the start of the NFL Draft, he has to make sure Bo Callahan is the kind of player he wants on his team. Highly regarded Ohio State linebacker Vontae Mack (Chadwick Boseman) has sparked doubt in Sonny. Despite what the experts think, is there something amiss with Bo? Sonny has no shortage of people with opinions on what he should do: the owner (Frank Langella) demands Bo so they can sell tickets, the coach (Denis Leary) wants a prized running back rather than having to struggle with a rookie QB, and Sonny’s coworker, Ali (Jennifer Garner), wants Sonny to come clean about their secret relationship and her impending pregnancy.

Less cerebral than Moneyball but still mightily entertaining, Draft Day is a pressure-packed crowd-pleaser skillfully made to deliver big payoffs, regardless of whether you watch football or not. Like the Oscar-nominated Moneyball, the focus is less on the game than the micromanaging of the game behind the scenes with the key personalities of an organization. The movie is knowledgeable, swift, and stuffed with characters that each have their own demands, always crashing into Sonny and pulling him in a new direction. It’s easy to see why this script was the number one screenplay on the Black List in 2013; it just moves, so effortlessly, cognizant of the ticking clock at every moment and the impending stakes for our hero. It’s a man with one mission: the future of the Browns, but with infinite ways to do it, each side pushing a favorable case for themselves. There are so many permutations to putting together a team, let alone having the number one pick. And if Sonny doesn’t make a splash, he knows he’ll be out of a job at the end of the season. It’s a position rife with conflict and dramatic payoffs. There’s the pressure of the fanbase, hungering for a winner to finally root for, the pressure of the owner, salivating over the ticket sales a splashy QB can provide, and there’s the pressure of Sonny’s own father, a man who recently passed that forces Sonny to reflect on what will be his own legacy with the Cleveland Browns. As a sports fan, it’s fascinating for me to listen to experts talk about the nuts and bolts of putting a team together. As a movie fan, it’s easy to get into the film with its underdog protagonist, a man trying to get out of a hole of his own doing, which means his moments of triumph are even more resonant.

The film smartly presents itself as a combination of an investigative mystery and a high-stakes con game. Sonny has the number one pick and yet his gut is telling him something is amiss with the surefire can’t miss quarterback prospect. With the Draft that very day, Sonny is under tremendous pressure to conduct a speedy background check into Bo Callahan. Each minute that passes the more significant it becomes to know who Bo is and follow the leads on questionable evidence; Sonny can’t assign the future of the franchise to a player that will leave it in ruins (or in the case of the Browns, more ruins). Sonny has mortgaged his team’s future and the pick better be worth it. The Freakonomics guys estimated that a bad franchise QB (think the Raiders with JaMarcus Russell in 2007) could set back a team on average five years. Likewise, the film balances this ongoing mystery with a con game. Every team is trying to fleece the gullible and needy, and Sonny fields offers for his top pick, some laughable and some tempting. Once the Draft kicks off, and Sonny steers his team in the direction he desires, that’s when the film gets even more exciting. We watch the man spin and deal and conspire, flexing muscle against other teams and regaining a position of strength. It’s tremendous fun for football fans and non-fans alike just to watch a professional in their element con his way to victory.

With as much conflict that comes naturally from the setup, I wish Draft Day didn’t feel so sitcom-y at times, shoehorning in trite additional conflicts and storylines. Let’s just assess the day for Sonny: he’s the GM with the number one pick, his future and the team’s future hangs in the balance, but his father also just died, his mother insists upon an ashes scattering burial that day, he has to perform a deep background check on his would-be franchise QB, he’s been harboring a secret relationship with an assistant who wants to go public, and he’s just been informed he’s going to be a father. That’s a lot of conflict for one man in a period of one day, and the confluence of all this drama in such a short window of time is far too unbelievable. You might wager that at the end of Draft Day Sonny puts a pistol in his mouth. The romance with Ali, and his impending fatherhood, never really works, serving up Sonny an opportunity to reflect and squeeze in some exposition, a life outside of football. The romance subplot feels tacked on and malnourished. Likewise, there are characters and moments that feel like they were slapped together as apart of some broad marketing package. Ali has a hapless intern who always comically happens to be in the wrong place at the wrong time. Well, it’s supposed to be funny, but it just feels forced. There’s a scene where the Browns’ coach sets a draft analysis on fire, dropping it onto Sonny’s desk, only to have Ali douse it with a fire extinguisher. Football is a theatrical game to begin with, attracting colorful characters with oversized egos, but actions like this just feel strangely silly and false. 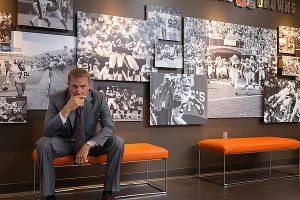 Director Ivan Reitman hasn’t made many films since 2001’s underrated Evolution, and one of those was the horrendously unfunny, misogynistic My Super Ex-Girlfriend, so the prospect of “an Ivan Reitman film” doesn’t have the same draw as it once did. His touch with actors is still kicking. Costner (3 Days to Kill) is great in a role suited to his talents. Even with a thankless role, Garner (Dallas Buyers Club) can be a winning big screen presence. The film is packed with great actors filling out even the smallest of roles (hooray Sam Elliott, Chi McBride, Terry Crews, Timothy Simons, and Kevin Dunn). Boseman impressed me more with a handful of scenes here than in the entirety of 42 as Jackie Robinson. The best decision Reitman makes as a director is to present the movie as the breezy two hour-entertainment it is, keeping the pacing to the floor. However, Reitman gets drunk on his use of split-screens. It begins on an interesting note, with one side transitioning beyond the division of the split-screen. Then it happens again and again, sometimes repeatedly in one scene. It was a neat visual device that Reitman just can’t let go of, which might actually get some people queasy with the sliding scenes.

Time for a personal disclosure: as a diehard fan of the Ohio State Buckeyes and a relative fan of the ever-suffering Cleveland Browns, this movie was tailor-made for my own sports fandom. The people of Cleveland will especially enjoy this movie. During my preview screening, when the Seahawks brass asked, “Who would be that desperate?” and the scene cut to a skyline of Cleveland, my audience cheered. That’s us, they all agreed. The world of Draft Day also exists in a slightly parallel plane where the Dallas Cowboys have won “a lot” including recent championships. Enjoy that fiction, Dallas fans. In the original draft by writers by Scott Rothman and Rajiv Joseph, Sonny was the GM of the Buffalo Bills, but cosmically it just feels correct that it’s the Browns, a team defined by its long history of letdowns, epic collapses, draft busts, and comical mismanagement. It’s eerie that the Browns themselves are faced with a similar situation for the 2014 Draft. Many pundits predict the Browns will select a new franchise QB with their number four pick, but are any of these young men up to snuff? Are there character concerns for Johnny Football? Should the Browns give their own promising quarterback another chance after a season-ending injury before starting over at the position? Eerie.

Draft Day isn’t exactly the football equivalent of Moneyball, but it’s close, though more mainstream in appeal and execution. As a football fan, I’ve been looking for an intelligent and analytical look behind the scenes of the most physical of American sports. In 1999, Oliver Stone came close with the noisy and expansive Any Given Sunday. With this movie, we have a mixture of genres (mystery, con, existential drama) that turn the sports movie into something greater. It’s fun, often humorous, breezy, charming, and agreeably entertaining even when it takes one too many forced detours amidst all the conflict. You don’t have to be a football fan to have a good time with Draft Day, though it helps. This movie very well may be the highpoint of the Cleveland Browns’ season this year.