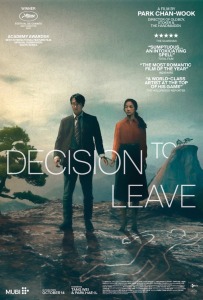 Imagine crossing a classic film noir detective story with some unrequited romance heavy with yearning, like In the Mood for Love, and that’s the combo you get with director Park Chan-wook’s newest, Decision to Leave. In Busan, a straight-laced detective (Park Hae-il, The Host) is investigating an older government official who fell to death from a mountain peak. He suspects that the man’s wife, Song Seo-rae (Tang Wei, Lust, Caution), a much younger Chinese immigrant, might have something to do with the death, and so the detective gets closer and closer to his suspect, blurring the lines of the investigation and his own personal desires. It sounds like familiar genre territory, and it can be, but director Park Chan-wook (The Handmaiden, Oldboy) is the X-factor, and quite simply, he shoots the hell out of this movie. There are some jaw-dropping shot selections and camera arrangements here to cherish. The movie is less interested in its sordid murder mystery details and more the possible relationship between its two magnetic poles, made even more complicated by the detective already being married, though only spending the weekends at home. There is a stormy swell of will-they-won’t-they sexual tension in constant churn, and it adds a dour sense of melancholy to the entire movie. There’s a time jump two-thirds of the way through the movie that is slightly aggravating, because it’s like starting over and repeating the mystery catch-up but with less time, making the details of this new case even less meaningful than earlier. Decision to Leave ends on a strong downbeat that feels appropriate given the mood of the preceding two-plus hours. I don’t think the characters are as textured as they could be, part of this is being jostled around by the non-linear storytelling and artistic tricks of Chan-wook. I think the movie generally favors mood and flirts with wanting to be seen a tragic romance worthy of Hitchcock, though I don’t think it fully gets there. So much of the movie is about probing whether or not the feelings are real between these two, whether she’s toying with him or he just wants to complete the unfinished assignment (the dynamic reminded me of Luther and Alice in the BBC series Luther). Decision to Leave feels like a solid film noir mystery, elevated by A-level directing talent, and then missing its ambitious grasp with its lilting love story that feels a little too subdued and understated to really smolder.