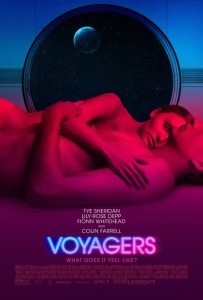 Voyagers feels so astonishingly like a Young Adult novel and yet it is an original screenplay from director Neil Burger (Limitless, Divergent), though it borrows heavily from Lord of the Flies at that. Set in the distant future, we’re aboard a colony ship with teenagers meant to be the future of Earth, or at least their grandchildren will be when they land on a new planet. They’re kept on a controlled regiment of activity, nutrition, and mood-altering medication to keep their hormones in check until it’s optimum breeding time (in vitro operations). After an accident, the teenagers are all alone on a ship with no adults, and they fear an alien might have snuck on board. This leads to different factions being created, one that says to follow the rules established by their adult authority figures, and the other that wants to stop taking their meds, stop rationing their supplies, and live as wild as they desire. This leads to extended bouts of PG-13 horniess; the movie practically feels like it’s trying to dry hump you for stretches of time. Everything is very YA, from the character dynamics, to the major conflict without adults, to dealing with their hormones and the thrill of freedom. I found an unexpected parallel with this movie to the January 6 insurrection. The villain in this movie, played snidely by Fionn Whitehead (Dunkirk), is a darkly charismatic leader who appeals to the most selfish, self-destructive instincts of his peers, and even after definitive proof is given about his moral culpability, he’s able to still gaslight his followers to accept his reality distortions and stirs them into an ignorant, violent mob. I found this character’s eventual death to be extremely satisfying as a climax. Regardless, Voyagers isn’t anything special. It’s a lot of running down corridors, smokey side eyes and lip biting, and paranoid shouting about who is or isn’t the alien. As a user so succinctly put it on Letterboxd, it’s “Among Us but horny.” 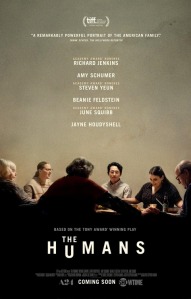 I was left cold and confused by The Humans. It’s an adaptation of a Tony-award-winning play, by the playwright himself, and I don’t know what all the fuss is about. It’s a sparse movie set during a tense Thanksgiving dinner while a dysfunctional family moves one of their own into her New York City apartment. The conversation style is very natural and the characters behave like recognizable people; however, that doesn’t make them particularly interesting. This was the same issue I had with last year’s Shit House movie, a movie that confused realistic conversations with interesting conversations. Just eavesdropping on people and getting the occasional spark of conflict is not enough. I was relatively bored throughout and then when the movie tries to lurch into paranoia horror I had no idea what was happening. It feels like a dull drama that had no real ending and then someone said, “What if we spent the last ten minutes of this chamber piece conversation walking down dark corridors and inspecting noise?” The acting talent here is tremendous, including Amy Schumer in a rare dramatic role, and it just feels like a waste of their time. I don’t know what proved so appealing to critics here. 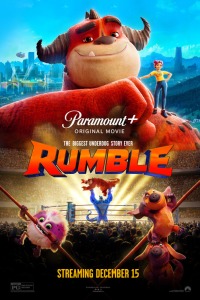 No more and no less than exactly what you’re expecting, Rumble is a giant monsters wrestling movie that’s cute enough to entertain young kids and pass the time agreeably and not much more. The world isn’t exactly fleshed out and the characters are very archetypal and the plot is entirely predictable, but I found it mostly fun and low-level escapism. It’s nothing that will wrestle with the better animated films of the year, but if you have little ones that are fans of wrestling or giant monsters then that might be enough to keep their attention for 90 minutes.