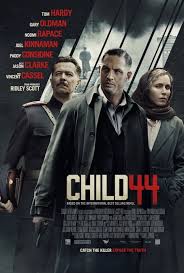 Unfairly cast out like some unwanted vermin, Child 44 is a police procedural based on a best-selling novel that the studio simply wanted to get rid of quietly. It was “dumped” into theaters and, as expected, began its disappearing act. That’s a shame, because it’s actually a rather involving mystery and an especially fascinating perspective into a little known world of being a cop on the other side of the Iron Curtain. Tom Hardy plays Leo, a member of the Soviet state police who is tracking a serial murderer preying upon orphaned children across the countryside in 1953. His wife (Noomi Rapace) is terrified of him and secretly a rebel informer. The two of them get banished to a Soviet outpost when Leo refuses to turn her in; he also refuses to accept the state’s conclusion over the dead children. In a weirdly perplexing turn, the Soviet Union believed murder was a Western byproduct. “There is no murder in paradise,” we are told several times, and since the U.S.S.R. is a communist worker’s “paradise,” whatever reality that doesn’t jibe with the party line is swept away. The murder mystery itself is fairly well developed and suspenseful, but it’s really the glimpse into this bleak and paranoid world that I found so intriguing. Child 44 is a slowly paced film thick with the details of establishing the dour existence of Soviet Union life. You truly get a sense of how wearying and beaten down these people’s lives were, how trapped they felt, how justifiable their paranoia was. The husband and wife relationship grows as they’re forced to reevaluate their sense of one another, and it genuinely becomes a meaty dramatic addition. Child 44 is a slow movie but the pacing serves the deliberate and oppressive tone of the film. It’s a film with some problems and missteps (certain antagonists make little sense in their motivations), including some incoherent action/fight scenes (fighting in the mud? Way to visually obscure everybody, guys). However, this is a better movie than the studio, and a majority of critics, would have you believe. It’s engrossing and taut and ambiguous and consistently interesting, with another standout performance by Hardy. Like many of the characters, this movie deserved a better fate.