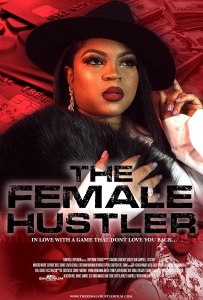 The Female Hustler is one of the top movies on the streaming site Tubi, which is available for free with minimal ad breaks. Anyone can check it out, and congrats to this Columbus, Ohio-made indie thriller written and directed by Columbus native Dom Campbell (Bad Business). He’s getting his feature film projects out into the world and a wider audience and that is definitely something to celebrate. However, I think considering a larger audience will do Campbell better, as The Female Hustler feels too inert to be more than the sum of its already familiar and genre-soaked parts.

Princess (Courtney Godsey) is struggling to save her friend from a pimp and help her brother get a better life. She’s looking for work when her chatty Uber driver, Omar (Campbell too), invites her into his multi-million-dollar identity theft scam network. From there, she rises through his ranks and becomes a threat to Omar’s leadership. We jump forward in time and Princess has become “The Female Hustler” and leading her own top-notch outfit. Omar is looking to take out his one-time protégé and regain his empire, but he might not be the only threat facing Princess.

Made for $50,000 and filmed throughout Columbus, as well as stops in Los Angeles, The Female Hustler has more than a few artistic merits. It’s a gangster genre movie that knows its audience well, which is likely why there are several close-ups of butts within minutes. Campbell recognizes that this movie is going to be less a complicated, nuanced, inter-textual crime story akin to something like The Wire and more like a knockoff of a knockoff of a blaxploitation film. I think a filmmaker knowing their genre and what makes it work is essential to playing to its strengths. The Female Hustler feels like it can walk its walk. I’ve watched enough lower-budget Ohio indies to tell when the photography is a step above, and the FIVE credited cinematographers for this movie at least deliver quality with their quantity. The grimy color grade is solid atmosphere but the crispness of the images and the use of lighting can actually be quite artistic for a lower-budgeted crime flick. The sequences outdoors at night were really good looking. I’ve watched enough barely-lit outdoor scenes that struggled to convey key info. These outdoor scenes have levels of clarity and color and even reminded me of Michael Mann’s digital video thrillers like Collateral and Miami Vice. That doesn’t mean all of the visual compositions feel dynamic; too many shots come across like they were clumsily composed on the spot. It works, but the skill of the camera quality, post-production, and/or camera operators are elevating the many perfunctory camera setups. The movie is packed with modern rap and its bouncy beats give a better sense of pacing and energy, especially when what’s happening onscreen is mostly people fronting poses. A lot of the acting is enjoyable too. I’m not going to say anybody is a star in the making, but the actors can be amusing or charismatic or intimidating when called upon, and Godsey is a worthy lead to build upon.

Where The Female Hustler doesn’t quite work is as a story with enough connective tissue and a satisfying conclusion. I was shocked that there is no ending offered at the conclusion of its 82 minutes. The entire back half of the movie is setting up a climactic confrontation between Princess and her former mentor, Omar, and they each bring their crews together for a fateful summit, and then everyone scatters, a betrayal is revealed from a supporting character, and the movie then rolls credits. I suppose maybe Campbell is intending to make this into an ongoing franchise, a move I would deem dubious given what we’ve been given in this first and so far only entry. However, given everything that transpired in this dawdling movie, there is no excuse to cheat your audience out of any ending. It’s not just that The Female Hustler has a bad ending; it doesn’t even have an ending. None of the storylines have been resolved, nobody has altered their standing, and no wrongs have been righted. It’s confounding that the movie just seemingly ran out of time after doing so little for forty-something minutes of characters making threats and bragging about their successes. The decision on the ending really harms the entire movie, looking backwards. It clearly feels like Campbell had an idea for a movie and little realization how to better develop and see it through. The concept of a woman rising to power through a criminal organization, a dangerous “man’s world” of intrigue and violence, is a fine dramatic template. Watching an underdog take out their obstacles and people doubting them is an inherently satisfying and engaging narrative. That is not really what we get with The Female Hustler, a movie too content to be a longer version of a trailer when it comes to minimal characterization, plot development, and surprising twists and turns.

I can summarize the main plot as three data points: 1) Princess is learning the criminal lifestyle, 2) Princess has become successful under Omar, and 3) Princess is even more prosperous as her own boss. You would expect there to be connective tissue and sequences that served as getting us from one station to another, scenes where Princess learned harsh lessons, or rose to the occasion and surprised her boss or herself, something to note the character development from a novice to a hard-edged leader. There are few of these sequences if any. The second half of this movie almost feels like a resume bragging about Princess’ accomplishments. It’s scene after scene of characters simply relaying the state of things. Naturally, I assumed these exchanges were to ground the audience so we could then chart later changes as what had been gained is now in jeopardy. However, this doesn’t happen and the movie is awash in wheel-spinning exposition. It’s almost comical how scene after scene involves this new character and that new character just telling Princess how good a job she’s been doing. Then we’ll have scenes of Princess nodding along. In some ways it’s reminiscent of little kids in role play, less worried about how things got to be and more about establishment (more “I’m the king of the universe,” and less how it got to be). That’s why this plot feels so bare-bones as to be mistaken as simply a larger version of its trailer. It just feels like we’ve dropped into three stagnant scenarios and stuck with repetitious scenes restating the status quo while we wait for some upheaval or climax that never actually arrives.

I felt that maybe the whole back half was leading up to the final confrontation between Princess and Omar, and when she kills her mentor, it would at least feel like she has moved forward. That’s the basic setup of this kind of story, where the mentor brings in the protégé, then they conflict and then the mentor has to be put aside permanently to fully achieve a higher level of success on their own terms, no longer held back by the definitions of the past. I just watched this basic narrative recently in House of Gucci with Lady Gaga as our change agent. That’s why I’m flabbergasted that The Female Hustler doesn’t so much end as implicitly say, “To be continued?” It doesn’t need to, especially when the movie is only 83 minutes long, especially when the movie hasn’t really done as much with those 83 minutes. We could have watched Omar, in his desperation, strike back at Princess’ empire, chipping away at her power, capturing and killing her valuable team members, and Princess having to process how far she’s willing to go to take out her competition, establishing lines only to question crossing them. It’s like Campbell has assembled his key characters for a crime epic and then merely given them place-holder dramatic scenes and rote dialogue bravado (“You should have had a crash course on me… now you’re a crash test dummy”). It’s a movie with nowhere to go in its imagination.

Why introduce members of Princess’ crew, one-by-one with flashbacks showcasing their skills, if the movie isn’t going to feature these characters outside of this scene? What does it matter to the audience knowing so-and-so is good with money or good with computer hacking if they don’t even contribute to the story afterwards? Why introduce the FBI agents following the criminal goings-on if these guys will never factor in again either? It’s like teasing future conflict that doesn’t ever materialize because Princess never feels in danger. Imagine watching a heist movie that is nothing but recounting 100 members of the crew, their unique skill set, and how they came to be recruited, and then they were never seen or heard again and the movie just ended. What would the point be? What have we accomplished moving a larger storyline forward?

This brings me to my biggest complaint with many Ohio indies, and sadly The Female Hustler appears to have fallen victim too: they are too insular and inaccessible that they seem to have forgotten about playing to an audience, thus only really prove appealing to friends and family of the production. There isn’t a thrilling story, or engaging characters, or a gritty, compelling world here to keep your attention through the overly padded 83-minute run time. I’m happy for local professionals when they can pool their efforts and actually put a movie together, but unless they want it to feel like an inside joke or something only intended for the most limited of viewing spheres, they need to constantly be thinking outside themselves and ask, “Why would anyone care?” The Female Hustler has some technical plaudits that allow it to rise above some of its fledgling peers. I think Campbell is a better director than a screenwriter and would benefit from collaborators in that field. He and his production company Emperium Studios have a spinoff with the brainy kid hacker character in the works, a TV series called A Kid Named Bug, and judging from early pictures, it looks like an entirely different tone for Campbell. Good for him. Keep hustling, young man, and remember to think about movies being intended for an audience, otherwise it’s a very expensive hobby for you and your closest friends.