Kenneth Branagh returns to his boyhood home with Belfast, a coming of age story set during the Troubles in 1969 where Protestant mobs were targeting Irish Catholics. The movie is partly autobiographical as we follow young Buddy (newcomer Jude Hill) and his parents (Jamie Dornan, Caitriona Balfe) and grandparents (Cirian Hinds, Judi Dench) dealing with life as their neighborhood block more resembles a war zone. There are dangerous influences and dark intentions on the peripheral, but we’re mostly at kid level, where his days are preoccupied with sitting closer to his crush in school and wanting to impress his older cousin and be accepted. The parental perspective is kept to offhand whsipers and weighty conversations about moving away or staying behind. The black and white photography is gorgeous and exquisitely composed, looking like old family photos come to rich life. The actors are charming and heartfelt, and when called upon deliver emotional fury. The problem with Belfast, and it feels mean to even cite it as such, is that everything is just a little too nice, a little too clean, a little too safe. The childhood perspective doesn’t quite jibe with the political instability at hand. It’s not a Jojo Rabbit where that disconnect is the point for reflection. It’s clearly Branagh’s love letter to his family and native land. It feels like entire scenes have been plucked directly from Branagh’s nostalgic memories. It also feels like the characters are more sweet-smiling composites than real people. It’s all been romanticized with Branagh’s personal nostalgia, reshaping the odd angles and dangling conflicts into something more sentimentally safe, easy, and inoffensively digestible. Belfast is a perfectly enjoyable movie but it feels like a simple TV movie-of-the-week, crowd-pleasing version of a complex story worthy of greater nuance and scrutiny. 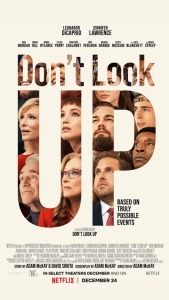 A scorched Earth satire that flirts with a literal scorched Earth, Don’t Look Up is writer/director Adam McKay’s star-studded condemnation of everything stupid and myopic in media, politics, and pop culture. Jennifer Lawrence plays a doctoral student who discovers a comet heading for direct cataclysmic impact with Earth, and she and her astronomy mentor (Leonardo DiCaprio) are trying to sound the alarm but nobody seems to be listening. Not the president (Meryl Streep) and her inept chief of staff/son (Jonah Hill). Not the greedy CEO (Mark Rylance) of a tech company. Not the media where morning TV co-hosts (Cate Blanchett, Tyler Perry) are more compelled by music star breakups than pressing science. It makes a person want to stand up and scream about priorities, and that’s McKay’s point, one that will be bludgeoned again and again. This movie is animated with seething rage about the state of the world and the cowardice about facing obvious problems head-on. It’s fit as a climate change allegory but COVID-19 or any scientific crisis could be applied as well. It’s about choosing ignorance and greed, about deferring to our worst instincts, and those in power who profit from inaction. I laughed at several points, some of it good cackling, and the movie is dark to its bitter end. This is the bleakest movie of McKay’s foray into his more sober, activist movie-making (The Big Short, Vice). It’s less Seeking a Friend for the End of the World, exploring the foibles of humans reconciling their last moments of existence, and more Idiocracy, where there is a lone voice of reason and the rest of the population are aggravating morons that refuse to accept reality even if it literally means just looking up with their own eyes. In some ways, the dark laughter the movie inspires is cathartic after years of COVID denials and mask tirades and horse medicine. The satire is bracingly blunt but also one joke on repeat. If you’re the right audience, that one joke will be sufficient. I don’t think the movie quite achieves the poignancy it’s aiming for by the end of its 138 minutes, but the anger is veritably felt. Don’t Look Up wants us to save the world before it’s too late, though the people that need to see the movie the most will be the ones fastest to dismiss it. Still, congrats to McKay for making a movie this depressing and relevant for the holidays.