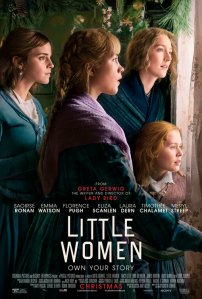 By my count, this is approximately the 182nd version of Louisa May Alcott’s Civil War sisterhood. There must be something universal about the trials of the March sisters and their struggles for independence, agency, love, and happy endings on their own turns. Greta Gerwig, fresh off her Oscar nominations for Lady Bird, has given Little Women a decidedly modern spin. The story flashes back and forth between past and present, sometimes in consecutive shots, and feels full of authentic youthful energy. It’s also the first adaptation I’ve watched that has fixed the problem of Amy (Florence Pugh, affecting), widely regarded as the least liked sister. Through Gerwig’s telling, she becomes a self-determined woman, just like Jo (Saoirse Ronan), who recognizes the social trappings holding her back but chooses to do her best within this unfair system rather than rage against it. It’s like an empathetic reclamation for this often reviled character. The enjoyment of Little Women is how vibrant and different each of the March sisters is and how an audience can see degrees of one’s self in each little woman. Jo is by all accounts our lead and her struggle to be a successful writer pushes her against conventions of the era. There is an invented and very amusing bookend where Jo bickers with a blowhard male publisher (Tracy Letts) about “women’s melodrama.” It’s a meta commentary on Alcott’s book herself, especially with the helping of marriages and happy endings by story’s end. Ronan is a force of nature in the film and sweeps up everyone around her with charm. Meryl Streep is supremely amusing as an older rich aunt bemoaning the girls won’t get anywhere without marrying a wealthy man. The limited options for a working-class family are given great consideration, but it’s really a movie that seems to pulsate with the exciting feelings of being young, having the world stretch out before you, and chasing your dream, rain or shine. It’s also gorgeously shot and feels so assured from Gerwig as a solo director. There are a few detractions for this new 2019 Little Women, the biggest being how confusing it can get with its melded chronologies. If this is your first exposure to Alcott’s story, I fear you’ll get lost more than a few times trying to keep everything in order. The love story with lovesick pretty boy Laurie (Timothee Chalamet) feels tacked on even though it’s a feature of the novel. This newly structured, reinvigorated, charming remake of a literary classic feels definitely of the period and of today. It’s the first Little Women adaptation that made me realize how timeless this story really can feel in the right hands. It may be the 182nd version but it might be the best one yet.

A slow-paced Western with A-list actors, Scott Cooper’s Hostiles is a ponderous Western that feels too lost in its own expansive landscapes. It’s about an Army captain (Christian Bale) reluctantly taking the lead to escort a Cheyenne chief to die on his native soil. As you could expect from that premise, Hostiles is reverent and meditative to the point of boredom. It deals with Major Themes about man’s place in the world, connection to nature and the land, and our treatment of Native Americans, but it feels like it believe it’s saying a lot more than it accomplishes. The final film is over two hours but I kept waiting for the movie to feel more substantial, for the real story to start. The premise is workable and there are some interesting side characters, notably Rosamund Pike as the sole survivor of her family’s Native American attack, but it all feels underdeveloped to serve the central figure. It’s a story of one man having to come to terms and forgive himself for the cruel things he’s done in the past in the name of glory, honor, and patriotism. There are too many moments where characters reach out to remind him that he is, in fact, a Good Man. It gets to be too much. The talented supporting cast is generally wasted. Bale (The Big Short) is very internal, almost far too insular as a man speaking with looks and eyebrow arches, as he feels the weight of his soul over the course of this journey. I just grew restless with the movie and kept waiting for it to change gears or get better. Hostiles is not a poorly made movie, nor without some artistic merit, but it’s too languid and lacking.

Two new awards-caliber film releases couldn’t be more different. One of hyper-literate in a high-stakes world of drama, gambling, and crime, and another is somber, lackadaisical, and personal, chronicling a summer love that changed lives. One movie has scads of plotting it zooms through with high-powered visuals and voice over, and another luxuriates in the moment, a placidity on the surface interrupted by rising passions. One of these movies I found captivating and the other I found perfectly nice but unremarkable.

Molly’s Game is Aaron Sorkin’s directorial debut, clearly having studied at the altar of David Fincher, and he packs a lot into his 140 minutes chronicling the rise and fall of Molly Bloom (Jessica Chastain), a former Olympic hopeful who found herself running an expensive, private series of poker games. She’s drawn into an unfamiliar world and through her tenacious grit, preparation, and fortitude, she is able to become a fixture amongst the rich. Then the FBI comes knocking and wants to charge her in conjunction with being part of a Russian money laundering operation. Driven by a fierce performance from Chastain, Molly’s Game is a gloriously entertaining movie that glides by. It burns through so much plot so quickly, so much information, that you feel like you might have downloaded Bloom’s book while watching. The musical Sorkin dialogue has never sounded better than through the chagrined, take-no-prisoners Chastain. The snappy dialogue pops, the characters are richly realized, and even during its more outlandish moments, like a surprise paternal reunion therapy session, Sorkin packs multiple movies of entertainment in one brisk, excellently manicured production. 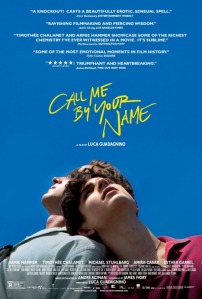 In contrast, Call Me By Your Name is a slower peak into the discovery of romantic feelings between 17-year-old Elio (Timothee Chalamet) and grad student Oliver (Armie Hammer). Set amid the sunny countryside of northern Italy, the film takes it sweet time establishing the lazy world of its characters and their closely intersecting orbits. I became anxious because the characters kept me at arm’s length, leaving their burgeoning romance to feel distant and tame. I understand the hesitation of both parties and the age difference complicating matters. I understand caution. But it feels like the film is cautious to a fault, to the point that one of them laments later why they wasted so much time. The acting is pleasant if undistinguished. The best scene is a terrific monologue by Michael Stuhlbarg as the world’s most lovably accepting father. For an earth-shattering romance, I too often felt unmoved and restless. If we’re going to spend this much time hanging out with these people we should get to know them more intimately, and not just in the physical sense. I missed the compelling artistic charge of something like a Moonlight. I’m a bit stupefied at all the praise heaped upon Call Me By Your Name, a fine indie drama that, for me, too infrequently delves below its pretty surface into something more substantial.

I don’t know if this recent comparison sheds light on any personal insight, but perhaps I just love big, showy, obvious plot that calls attention to itself, with characters that fill a room, rather than an airy romance that moves at the speed of its own breeze. Anyway you have it, one of these movies makes my Best Of list and the other just makes me shrug.

Call Me By Your Name: B-

Coming-of-age movies typically coast on a combination of mood, sense of place, and character, and Greta Gerwig’s Lady Bird excels in all areas and supplies a straight shot of happiness to the senses. Gerwig serves as solo writer and director and tells a semi-autobiographical story of “Lady Bird,” a quirky, determined, feisty, self-involved, and vulnerable teenager (Saoirse Ronan) trying to leave the lower-middle-class confines of her Sacramento life for bigger pastures. Ronan (Brooklyn) is spectacular in the title role and displays a heretofore-unseen sparkling sense for comedy, punctuating Gerwig’s many witty lines with the exact right touch. This can be a very funny movie and it has a deep ensemble of players. Ronan’s character is a magnetic force of nature that commands your attention and finds ways to surprise. The film follows her high school senior year’s ups and downs, potential new friends, bad boyfriends, social orders, family struggles, jobs, and most importantly her dream of getting into an East Coast college and leaving the trap she sees is her hometown. Her parents (Laurie Metcalf, Tracy Letts) are stressed and exasperated with their demanding daughter. Metcalf (TV’s Roseanne) is outstandingly affecting as the beleaguered matriarch. Much of the movie’s ongoing conflict, and later triumphs, revolve around the fraught mother/daughter relationship, and Ronan and Metcalf are never better than when squaring off. This is a movie rich in authentic lived-in details and observations. It can stray into overly quirky territory but Gerwig as director has a remarkable feel for when to hold back. There’s a genuine and poignant family drama at its heart that doesn’t get lost amid the whimsical additions that cater to Lady Bird’s vibrant personality. By the end of a coming-of-age movie, the characters should feel a little wiser, having learned through heartache, bad choices, and changes in perspective. This isn’t a movie about big moments but about the ebb and flow of life and the formation of one’s sense of self. We should enjoy having spent time with these characters on their journeys. With Lady Bird, I couldn’t stop smiling like an idiot.