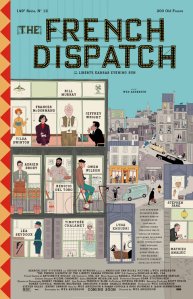 Wes Anderson’s latest quirk-fest is his usual cavalcade of straight-laced absurdity, exquisite dollhouse-level production design, famous faces popping in for droll deadpans, and the overall air of not fully getting it. The French Dispatch is structured like you’re watching the issue of a news magazine come to visual life, meaning that the two-hour movie is comprised of mainly three lengthy vignettes and a couple of short asides. This narrative decision limits the emotional involvement and I found myself growing restless with each of the three segments. I was amused throughout but each felt like a short film that had been pushed beyond its breaking point. Perhaps that is Anderson’s wry, subtle point considering the entire journalistic voice of the movie feels like somebody made a movie in the style of one of those esoteric, supposedly “funny” New Yorker cartoons. It’s occasionally so arch and droll that it feels too removed from actual comedy. This is not the most accessible Anderson movie for a newbie; it’s very bourgeois in the kinds of people it follows, the stories it pursues, and the intellectual and political conflicts it demonstrates. The first and best segment follows Tilda Swinton discussing a heralded but imprisoned experimental artist (Benicio del Toro) who is dealing with the pressure to produce. The second segment follows Frances McDormand as she investigates a Parisian student union revolting against the ignorant powers that be. The third segment follows Jeffrey Wright recounting an assignment where he investigated a master police chef (not “chief”) and gets in the middle of a wacky hostage negotiation. Each of them has the requisite charm and random asides we’ve come to expect from Anderson, including a leotard-wearing strongman that is called upon by the police to help during the hostage crisis, but it felt more like a collection of overlong short films than a cohesive whole. If you’re already a fan, by all means, step into The French Dispatch. If you’re new to the idiosyncratic world of indie film’s most precise curator, then I’d advise starting with a more digestible and earlier Anderson entry. I enjoyed myself during stretches, was getting frustrated during other stretches, and I hope Anderson focuses more on the big picture of his next picture.