Ready or Not is like the twisted lovechild of the home invasion thriller You’re Next and the meta-horror funhouse that is Cabin in the Woods, and it’s a total blast. This is no game.

Grace (Samara Weaving) is marrying into a rich family of socialites, famous for their family’s history with board games. Grace’s husband is reluctant about his bride joining the family he had walked away from for years. There is one big tradition: every new member of the family has to play a game upon their wedding night, dating back to the great grandfather who founded the family company through a chance encounter. Grace pulls a random card that says hide and seek, and that’s the game they must play. She’s bemused at being enlisted into a child’s game but little does she know that the family is arming themselves to find and murder her. They fear that if they cannot kill her before dawn, they will all be doomed thanks to an old curse.

The movie is entertaining from beginning to glorious ending thanks to finely developing its unorthodox premise and staying consistent tonally, whether it’s dark humor or tension. This is a very funny movie. In fact, I laughed more and harder during this film than I have with movies sold as comedies. It’s not afraid to spin its macabre premise for fun, but it impressively doesn’t lose sight of character and scenario along the way. That means that the screenwriters are deriving their humor from the absurdity of their situations and finding organic wellsprings of comic relief. The humor doesn’t detract from the danger of the moment while also enlivening the rest of the movie. The incredulity of the situation leads to some wonderfully ironic moments, like one relative studying YouTube videos for how to operate a crossbow, someone looking up on Google whether or not deals with the devil are real, and a running gag of the estate’s maids meeting horrible accidental deaths. And then there’s the ending, which finds a wonderful way to essentially have its cake and eat it too. I won’t spoil it but the ending to Ready or Not is a fist-pumping, cheering, clapping, highly memorable closer, and one of the best endings in years. It’s one of those endings you can’t wait to talk about with others.

All of the various family members have little notes to play and character beats that provide a more realized glimpse into their histories and the family dynamics than I would have anticipated. It made me feel like the filmmakers had given great consideration to even the smallest of details in what is, at its core, a murderous version of a children’s game. There’s the wife to Adam Brody’s character who is all-in on whatever it takes to maintain this family because she hints at what kind of horrible life predated her new life here. Then there’s the patriarch of the family who is all about ceremony and staying true to the rules until he has to experience the smallest challenge and wants to use whatever cheats he can at his disposal, arguing that great grandfather would use security cameras too if he could and why should they be penalized for simply playing the game in a more technologically advanced era. He’s just another rich douchebag who drops his pretenses the moment something isn’t handed to him. The characters are varied so that you can never feel relief when anyone is in a room, and that even includes the children, who seem destined to become new participants in this cycle. 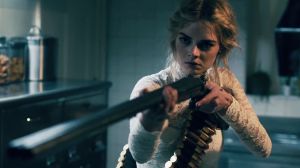 Even with its tongue-in-cheek humor and premise, there is a lot of clever thinking put into Ready or Not. There are plenty of setups that connect to later payoffs, including that amazing finish. The screenplay by Guy Busick and Ryan Murphy thinks things through step-by-step so that it’s always ahead of the audience. If any of us found ourselves in this scenario, we would likely try and escape as quickly as possible to an outside refuge. They provide an explanation for that hurdle. Then when Grace finds a way out, the screenplay finds a logical yet clever way to curtail that escape. There is a gruesome sequence where Grace suffers a specific injury and then has to pull herself out of a bad situation, and the movie sets up a gnarly out that connects to that injury, and I sat with baited breath just waiting for the puzzle pieces to connect, and Ready or Not has several moments like this. It’s a fun movie because while it doesn’t take itself that seriously it’s very serious about its storytelling and structure.

Weaving deserved to be an A-list actress after her star-making performance in Netflix’s The Babysitter. This woman is so magnetic and so great at roles that require a tightrope of tone; she sizzled as the darkly advantageous yet lovable babysitter in that other movie, and with Ready of Not she’s our increasingly baffled heroine just trying to make sense of the insanity. The audience gravitates toward Grace pretty quickly as a grounded woman who seems genuine about her desire to have the family that she never formed as a foster child. There’s a latent tenacity that emerges from Grace as she pushes herself through one survival scenario after another. Unlike the similarly themed You’re Next, Grace is not some secret badass raised by crafty survivalists. She’s a normal person thrust into a very abnormal situation, and her responses stay reasonable and formidable when called upon. She is our center for the fun and she makes a winning heroine, and Weaving is so good at the heavy moments, the gross moments, the sly moments, that she deserves to have great material handed to her because she is ready, Hollywood.

Ready or Not is a sneaky, nasty, delightfully dark little movie that left me hooting, hollering, squirming, and grinning with satisfaction. It’s a late summer surprise that delivers everything I was hoping for and has great, delicious fun with its humor and violence. It’s smartly paced, smartly structured, with supporting characters that leave a mark as well as thematic questions over culpability and group think. This is the kind of movie I wish Hollywood was making more of, with screenwriters that can take a premise and write the best possible version of that and with the best possible ending. Any misgivings I have for this movie are small quibbles, like maybe more specific payoffs linked to onscreen deaths, but even that would detract from later events and payoffs, so even my quibbles can be excused. Ready or Not deserves to be seen with a raucous crowd that will appreciate it to its full extent. I look forward to the Twister-heavy sequel.