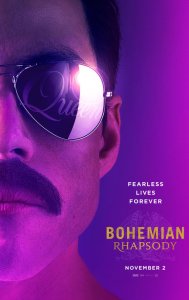 Biopics are trickier than they appear because how best can you distill the essence, and significance, of a person into two hours? We’ve edged away from the standard cradle-to-grave biopics more in favor of stories that hinge on monumental moments in a person’s life, meant to encapsulate their life both in micro and macro. Bohemian Rhapsody favors the former approach, which causes the movie to feel like it’s rushing through the cornerstones of Queen singer Freddie Mercury’s life. Even at over two hours, the movie feels like it has little time for things, often jumping into polished, well-edited montages of time progression. The creative birth of many of the band’s hits are treated as absurdly easy formations, going from a clap of hands and stomp of feet to “We Will Rock you,” or a bass line to “Another One Bites the Dust.” It’s like the movie is checking boxes for a biopic with an anxious eye toward the clock. Mercury’s homosexuality (he comes out as bisexual to his long-time girlfriend who corrects him and calls him gay) is given its due, not having been underplayed in an effort to court a more mainstream audience. Mercury’s sense of sexuality, and the struggle of his own acceptance, is essential to getting to know this flamboyant front man. Except several of these scenes feel mishandled, which is odd considering director Bryan Singer (X-Men) has often found parallels in big studio films for the gay experience. The movie seems to say if his band mates had only accepted him more then maybe he wouldn’t have fallen into promiscuity by a bad influence and thus contracted HIV. There are also some pat answers as well like a disapproving father. However, the faults of Bohemian Rhapsody are compensated by its virtues, none more so than the electric performance by Rami Malek (TV’s Mr. Robot) as Mercury. The actor struts and preens with infectious charisma, and a mouth full of Mercury’s oversized choppers, and he miraculously captures the powerful stage magic of his character. The concluding 1985 Live Aid performance is astounding to witness and a reflection of just how essential and virtuosic Mercury and company were as live performers. It’s a sustained set of several hits and the movie just sings to a close on the highest of high notes. Bohemian Rhapsody is carried by the music and performance of Mercury the character and Malek the actor. It will make you want to rock out to Queen on the car ride home.