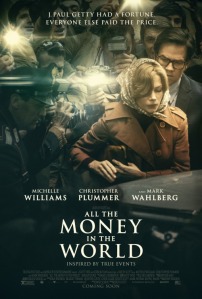 All the Money is the World used to star Kevin Spacey as the prolific oil billionaire John Paul Getty, that is until director Ridley Scott elected to reshoot the part, replacing Spacey with Christopher Plummer after Spacey’s unsavory history of sexual assault came to light. In only ten days, Scott changed his movie with only a month to spare before its release. It’s an amazing feat, especially when you consider Plummer is in the film for at least a solid half hour. He’s also the best part as the mercurial, cruel, penny-pinching magnate who refuses to pay his grandson’s ransom even though he’s the richest man who ever lived. In 1973, John Getty III (Charlie Plummer, no relation) was kidnapped by Italian criminals. With the miserly grandfather offering no help, Gail (Michelle Williams) tries to negotiate with the criminals and her father-in-law to secure the release of her son. I didn’t know anything coming into this film, but afterwards I felt like it focused on the wrong characters. The mother stuck in the middle is not the most interesting protagonist here and seems like a go-between for the two more immediate and intriguing stories, the elder Getty and the youngest Getty. Williams (Manchester by the Sea) is acceptable as the strong-willed, put-upon mother, though her mid Atlantic accent made me think I was watching Katherine Hepburn. Mark Wahlberg (Daddy’s Home 2) is completely miscast as a former CIA agent that helps Gail. He succeeds in converting oxygen to carbon dioxide and that’s about it. The central story is interesting enough, though there are points that scream being fictional invented additions, like a last act chase and a kindly mobster who undergoes reverse Stockholm syndrome. John Paul Getty is an interesting character, and Plummer is terrific, though I am quite curious what Spacey’s performance would have been like under octogenarian makeup (Plummer already happens to be in his 80s). All the Money in the World is an interesting enough story with decent acting but I can’t help but entertain my nagging sense that it should have been better even minus Spacey.