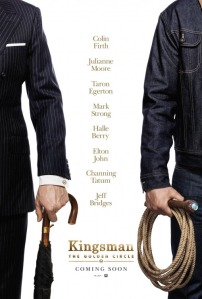 I’ve written before that director Matthew Vaughn is the best big screen filmmaker when it comes to making the most of studio money. This is the man who made Daniel Craig Bond, rejuvenated the dormant X-Men franchise, and gifted Fox a twenty-first century James Bond of its own. The first Kingsman movie was one of the best films of 2015 and was bursting with attitude, style, and perverse entertainment. It was my favorite James Bond movie that was never a Bond movie. Success demanded a sequel, and now Kingsman: The Golden Circle is upon us and proof that Vaughn may be mortal after all.

Eggsy (Taron Eagleton) is living a charmed life now that he’s earned his place within the ultra-secret, ultra-powerful Kingsman spy organization. In between battling villains and the riffraff, Eggsy tries to maintain some semblance of a normal life with his girlfriend Tilde (Hanna Alstrom), who, yeah, happens to be the princess of Sweden. Poppy (Julianne Moore) is a drug baron in the vein of Martha Stewart. She’s tired of lurking in seclusion in the jungles of Cambodia and wants the credit she deserves as the most successful businesswoman. She locates the homes of the remaining Kingsman and blows them up, leaving only Eggsy and Merlin (Mark Strong). Poppy takes aim at the war on drugs. She infects her own product with a deadly agent and holds the world hostage. Unless global leaders decriminalize drugs, millions of infected people will die. In the meantime, Eggsy and Merlin travel to Kentucky to seek out help from their American brethren, the Statesmen (Jeff Bridges, Channing Tatum, Halle Berry), a clandestine spy organization that also doubles as a gargantuan bourbon distillery. 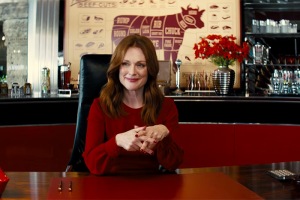 With Vaughn back at the helm I expected the best, and while Kingsman: The Golden Circle has plenty to like there is noticeably less to love. Being a sequel means that what once felt fresh will now lose some measure of its appeal and charm, and Vaughn and company do falter at times under the pressure to live up to what they established with their rip-roaring spy caper of an original. The brilliant structure of the first movie (mentorship, spy camp competition, class conflict themes) cannot be readily duplicated. There are interesting story elements here but Golden Circle doesn’t seem to know what to do with them, including with the titular Golden Circle. The villains never really feel that threatening. Poppy’s scheme is great and the 1950s diner iconography of her home is an eye-catching lair worthy of a demented Bond villain. It’s just that it feels like we never get a villain worthy of their wicked scheme. Where did she get all of this tech? Her henchmen are lackluster and a lackey with a cybernetic arm (Edward Holcroft) is no competition for Sofia Boutella (The Mummy) and her slashing blade legs. When the bad guys don’t feel like much of a challenge, it deflates the stakes and enjoyment factor of the big finale. It’s a series of ideas that need to be pushed further, refined, revised, and better developed. The first film was packed with surprises and payoffs both big and small, and the sequel feels lacking in payoffs of any kind.

The Statesmen are more a pit stop than integral plot element. You would think a majority of the film would be the international clash between Yanks and Brits, supplying some of that class friction that energized the first film. With the exception of Pedro Pascal (Narcos), you could eliminate them from the movie with minimal damage to the story. Channing Tatum (Logan Lucky) has gotten large placement in the advertisement but he is literally put on ice for a majority of the movie. The exaggerated cartoon nature of the Statesmen feels like Vaughn’s goof on American hyper machismo, but they stay at that same cartoon level throughout. They feel like parody figures, and Vaughn sidelines their involvement. The spy missions are a letdown. There’s an enemy compound atop a mountain in Italy, and all they do is walk inside, immediately grab the thing they need, and immediately run away. It all adds up to a two-hour-plus movie that’s still consistently enjoyable but also consistently unmemorable.

There are things in The Golden Circle that feel like they’re here just because of fan response rather than narrative necessity. The biggest offender is the return of Harry (Colin Firth). He served his purpose bringing Eggsy into the clandestine yet dapper world of the Kingsman, modeling as a father figure, and dying to push our protagonist onward. Bringing him back to life doesn’t serve the story except to bring back a character we genuinely liked. In this sequel, his return and subsequent amnesia doesn’t force Eggsy to retrain his former mentor. Instead he’s mostly a tag-along as another character to shoot the bad guys. Harry simply shouldn’t be here, and resurrecting him takes away from the shock of his death and the weight of his loss. They even recreate the “manners maketh man” bar fight, except the inclusion is so contrived that I thought it was all some kind of Statesman plan to ease Harry back into fighting shape. Nope. Another aspect that feels forced is Eggsy’s relationship with the princess of Sweden. This feels like an apology for the crass joke from the first movie that upset people’s delicate sensibilities (apparently this was worse than a montage of people’s heads exploding). The relationship feels forced and every time the movie cuts back to his troubles with Tilde, they feel small and annoying. It’s like Vaughn is trying to salvage a risqué joke by turning them into a committed couple. Then again the “mucus membrane” moment in Golden Circle (you’ll know it when you see it) seems like a renewed attempt at being transgressive.

The action set pieces have their moments but like everything else there are few that stand out or will stand the test of time. The film starts off strong with a brutal fistfight inside a speeding car. Even with the cramped quarters, it feels easy to follow, creatively inventive, and exciting. As the fight continues, the sequence loses its creative verve and becomes indistinguishable from any other silly Bond car chase. The big finale where the remaining Kingsman storm Poppy’s jungle compound has some cool moments, like Eggsy taking cover behind a giant rolling donut. Regrettably, the action sequences lack the snap and imagination that have defined Vaughn’s films, proving to be yet another underdeveloped aspect. The hand-to-hand fight choreography is still strong and stylish. The final fight between Eggsy and the metallically armed henchman has the fluidity, vision, and fun that were missing from the other scuffles. I’ll credit Vaughn with finding ways to make a lasso and whip look badass and integrating it elegantly with fight choreography (no easy task, right, season five of Game of Thrones?). I kept patiently waiting for any sequence that grabbed my attention like the insane church massacre.

There are two elements in The Golden Circle that rise to the level of entertainment of the first film, and one of those is literally Elton John. It starts off as a cameo with John being kidnapped and forced to perform for Poppy’s private audience. Then he just keeps appearing. He passes over from cameo to downright supporting actor, and just when you think you’ve had enough and that Vaughn has overindulged his Elton John fandom, here comes a climactic solution that is inspired and completely justifies the repeated John appearances. I howled with laughter and wanted to clap in appreciation. It was the best setup-payoff combo in the entire film. The other creative highpoint is a treacherous left turn into the politics of the war on drugs. Poppy argues how legal consumables like alcohol and sugar are far more deadly and addictive. I’ve heard all those arguments before about the hypocritical nature of the war on drugs from every armchair philosopher. Where the film really surprised me was when it gave voice to a nasty perspective I’ve heard in response to the rising opioid crisis in America. Some view drug addicts more as criminals needing to be punished rather than victims needing a helping hand and treatment. When Poppy makes her demands, there are government representatives that openly cheer her ploy, believing they can wipe out the junkie scum. This unsympathetic yet eerily resonant response felt like Vaughn and company finding organic ways to raise the stakes and bring in more sinister forces.

The movie never addresses one holdover from the original Kingsman that I think deserves at least a passing mention, and that’s the fact that every government leader or head of state in Western democracy had their head explode. That kind of public service vacuum would sow plenty of chaos and controversy, especially when people discovered that their elected leaders were complicit with the plan to kill the world’s remaining population. I feel like this was such a huge event that it at least deserves a cursory mention of some sort.

With the glut of disappointing and alternatively maddening action cinema this year, I’ll still gladly take Vaughn’s reheated leftovers. Kingsman: The Golden Circle feels like it’s succumbing to the bombastic spy hijinks it was satirizing before, losing some semblance of its identity and wit to crank out an acceptable though unmemorable sequel. It lacks the sense of danger and genre reinvention that powered the first film. Vaughn’s signature style is still present and there are fun and intriguing story elements available; however, the development is what’s missing. The cool stuff is there but Golden Circle just doesn’t know what to do with it, and so we gallop to the finale feeling a mild dissatisfaction. Apparently the studio execs at Fox want Vaughn to get started on a third Kingsman as soon as possible. I just hope he hasn’t lost his interest in the franchise he birthed. It would be a shame for something like this to become just another underwhelming franchise.