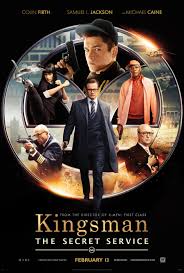 Director Matthew Vaughn’s Kingsman: The Secret Service is my favorite James Bond movie. It’s everything you’d want in a spy thriller while charting its own edgy direction. It’s a combination of Bond and My Fair Lady, and I never knew how brilliant that combination could be until Vaughn got his hands on the graphic novel source material. Newcomer Taron Egerton lays on plenty of star-making charm as a spy-in-training under the guidance of a dapper gentleman brawler Colin Firth. The spy hijinks are fun and stylish but what Vaughn does just about better than any other big-budget filmmaker is pack his movie with payoffs small and large so that the end result is a dizzying rush of audience satisfaction. The action sequences are exhilarating, in particular a frenzied church massacre made to appear as a single take. I never would have thought of the tweedy Firth as an action hero, but he sure plays the part well. There’s also an awesome villainous henchwoman who has blades for legs, and the film makes fine use of this unique killing apparatus. Kingsman explodes with attitude, wit, dark surprises, and knowing nods to its genre forbearers. Vaughn is a filmmaker that has become a trusted brand. He has an innate ability to fully utilize the studio money at his disposal to create daringly entertaining movies that walk to their own stylish beat. This is a cocksure adrenaline shot of entertainment that left me begging for more.