When The Session (formerly The Surrogate) debuted at the Sundance film festival, it seemed like Oscar catnip. You’ve got Oscar-pedigree cast, the limitations of disability (iron lung), and writer/director Ben Lewin (Paperback Romance) certainly knows a thing or two on the subject. He’s a polio survivor himself. But the story of a man in an iron lung’s sexual reawakening, as my mother would say, is a harder sell to the public. The movie has enough bizarre intrigue to garner a curiosity factor in many, and the sweeping acting and light-hearted tone will win over many a follower. I just wished that Lewin had focused more on his central character than what’s below the waist.

Mark O’Brian (John Hawkes) is a 37-year-old virgin looking to fix that oversight. The problem is that he’s suffered from polio all his life and can only be outside of his iron lung for upwards of a few hours. He’s not paralyzed, mind you; it’s just that his muscles don’t work too well. To move forward, Mark is set up with a sex surrogate, a sort of alternative therapy that is intended to help the disabled learn how to take control of their bodies for healthy physical relationships. Cheryl (Helen Hunt) has a set of rules as she goes about her business. There will only be six sessions to limit any emotional attachment. Mark is certainly a challenge, a man who doesn’t have muscle control below his neck (he confides that he hasn’t seen his penis in over 30 years). Together they work on getting Mark experienced and aware of his own body and abilities. 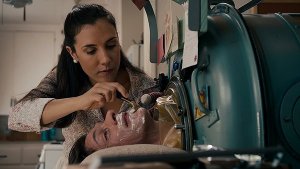 The Sessions is essentially a two-actor showcase (William H. Macy as a helpful priest is really just an ear to listen/audience surrogate), an ongoing dialogue and set of interactions between Mark and Cheryl. The script could have worked as a play though film certainly does open up the viewing possibilities when you’re dealing with an immobilized character. From that stand point, The Sessions is often a fascinating and funny portrait of a world that few of us will ever comprehend. We seem to have this concept that immobility is a death sentence; In Million Dollar Baby, Hilary Swank preferred death over disability. There’s the standard uplifting personal tales of success, the triumph of the human spirit, that sort of thing when we talk about disability in the movies. The Sessions is different. It’s all about sex, and it’s refreshingly frank about the realities of sexuality for those with disability. The human body is an amazingly adaptable creation, so no matter the setback, there is still plenty hope of having a relatively healthy sex life. Beyond a section in Murderball, I cannot think of another movie to explore the reality of sex for those with disabilities. It’s like a wondrous combination of two topics that makes people feel uncomfortable. So, in short, this is not going to be a movie for everyone.

That’s too bad because The Sessions is an engrossing story of a man trying to experience a world of human sexuality denied to him due to cruel circumstance. Mark is a relatively nice guy, a poet, though he can be a little quick with the emotional attachment and declarations of love. Can you blame the guy? I believe some will argue that limiting the focus to Mark’s sexuality, and his desire to shape himself into a better lover, is a misuse of the narrative potential. Some will chide that the film could be the indie version of any number of horny male sex comedies. To some degree, I can agree with this assessment, mostly because I wanted to follow more of Mark’s life and the movie is only 90 minutes long. But I also think the strict focus on human sexuality is also a boon for a movie like this. The fact that you could place a movie about a man in an iron lung and, say, American Pie in the same conversation is a testament that we are losing some of the stigma of disability. This guy wants to get laid. Period. And we can be grown up about this.

Hawkes (Winter’s Bone) is excellent in a role that requires him to do all his acting from above the neck. He’s convincing in every detail, down to his pained, willowy voice and his handling of a pointer for his mouth is first rate. Beyond the physical tics, Mark exists as a complex character that Hawkes is able to fully open up. He’s caustically funny, overcome with self-doubt, sweetly naïve, yet he’s also just like every other man on the planet. Hawkes doesn’t overplay the physical restrictions so it doesn’t end up being a performance dominated in showy actor traits. It’s a sweet and affecting performance that moves in small waves but makes a noted impact. Expect the man to get his second Oscar nomination this winter, as respected actor + disability is a combination they cannot refuse. Also, Hawkes is completely deserving of praise.

Hunt (Soul Surfer) has been grabbing a lot of headlines for the amount of skin she exposes, but her performance deserves more attention than a secondhand reference to her nudity. To be fair, it is copious nudity of Helen Hunt. I think she recites more lines while in different states of undress than clothed. It’s so much nudity that when you close your eyes, you may still be able to see it (not complaining here…). She does a lot of fine acting while naked. It’s hard exactly to get a bead on her character. She seems displeased with her insensitive husband, though he has to have some level of understanding to be okay with her profession. It feels like she’s looking to Mark as… something more, something else, but then it feels like her rationality returns and she returns back to the parameters of her job title. It’s a strong performance and the movie is at its best when Hunt and Hawkes are together. I just can’t help but feel if the ending wasn’t so blunted (more on that below) than maybe her performance would hit an even higher register.

The actors are so good and the movie is so tender, I almost forgive it for lacking a proper third act (some major end spoilers to follow). Naturally the number one concern you’d imagine for a sex surrogate would be the danger of building emotional attachment. This is why Cheryl limits her sessions to six max. That doesn’t stop attachments from forming. Mark and Cheryl are dreading the conclusion of the sessions, having grown close emotionally as well as physically. So to spare them lingering pain, Cheryl suggests they stop early. Mark reluctantly agrees. There, ladies and gents, is your second act break. But then rather than get a third act, the movie simply gives you a slightly extended resolution instead. Mark meets a nice volunteer at the hospital and flirts with her, crowing with pride to inform he is no virgin. But then… we cut right into Mark’s voice over telling us that he spent the last five years of his life with this new woman. We get an introduction and then immediately jump to the end of the relationship. I understand that without Cheryl’s kindness and education, Mark’s long and healthy romantic relationship would not have happened. I understand that he’s able to succeed because they broke down barriers of confidence together. This doesn’t stop the ending from feeling missing, absent the payoffs we yearn for in drama. It’s a curious and muffled close to a movie that was so interesting and audacious.

The Sessions is more than just an Oscar-bait disability movie. It’s really an arty version of a sex comedy with some extraordinary participants played by skilled actors. It has a frankness that’s refreshing and it’s never less than interesting, exploring the minutia of Mark’s life and the difficulties he overcomes. It’s not exactly a triumph of adversity, per se. It’s not exactly a chamber piece devoted to characters even though two dominate the conversation. The Sessions is a hard movie to pin down. It’s perfectly enjoyable and funny, touching, disarming, and well acted, but I can’t help but feel like Lewin should have aimed higher. To focus solely on Mark’s budding sexuality seems rather limiting for the character, and the disappearance of a final act proves bewildering, blunting the dramatic climax, thwarting further involvement. I’ve seen the film twice now and my opinion of it improved slightly the second go-round, but I’m still left scratching my head over that ending. I get it, I just don’t get why Lewin felt like racing to the end rather than exploring the conflicts and personal struggles of his characters. I suppose there’s some testament to sticking to the facts but that doesn’t matter when it comes to telling me a good story. I’m of a mixed mind here because The Sessions has plenty to recommend but I also feel that the film’s finale and light-hearted, limited sense of purpose hamstring the emotional impact of the whole enterprise. Disabled people can lead healthy sex lives. I get it. Now show me more signs of that life.