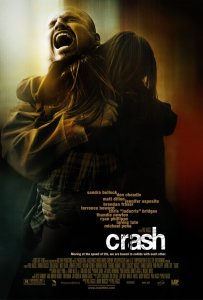 A searing look at race relations and a powerful human drama at that. This flick has some of the sharpest memories I’ve had from any movie all year, particularly the relationship between a Hispanic locksmith (Michael Pena) and his daughter and a special invisible cloak. Their first scene, where he talks her out of hiding under her bed, is one of the most beautifully written short scenes I have ever witnessed. A late scene involving the two of them knocked the wind out of me completely and is the most vivid moviegoing moment of all 2005 for me. Every character has at least one great moment, though time is not spaced equally amongst this large ensemble. Crash has the intriguing practice of introducing near every character spouting some kind of racist diatribe, and then the movie spend the rest of its running time opening you up to these characters and getting to like them. Writer/director Paul Haggis has such a natural ear for terse, realistic dialogue that can really define characters with such brevity. A fine movie, despite the overarching coincidences.