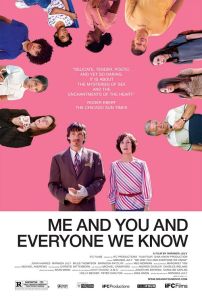 This movie is going to affect people very differently. Writer/director Miranda July, a note performance artist, has created a world of people fumbling for human connection. It’s deeply arty, meaning that meaning will be considerably different per viewer. For whatever reason, I was able to ride July’s artistic wavelength and enjoyed the series of oddball characters and weird vignettes, like a chain of cars keeping a goldfish alive atop one of their roofs. The film deals frankly with sexuality and involves teens experimenting, but the film exists in a world where sexuality still had its curiosities and detached humor, truly like a kid’s point of view. This movie has two of the most profoundly romantic moments of any film I’ve seen all year, but they are just moments. Me, and You, and Everyone We Know is a movie built around moments. There are enough of them for me and I appreciated July’s unique voice.