Charlie and the Chocolate Factory (2005) 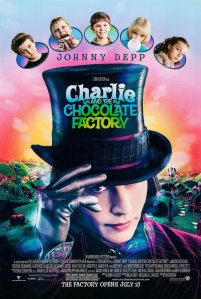 The visuals by Tim Burton are suitably lavish but it’s missing the heart of the 1971 film. I never thought I’d say a movie worked despite Johnny Depp’s performance, but that’s the case here. It was far too off. Whereas Gene Wilder had the dichotomy of warmth and madness, Depp was just the kooky Michael Jackson-esque weirdo in a bobbed haircut (I thought Neverland had been found). Perhaps the added Michael Jackson vibe makes the premise a lot darker, what with luring children into a chocolate factory. Charlie is a really boring character lacking definition beyond his “goodness.” Once they get to the factory he?s basically wallpaper, watching his peers fall one by one to their vices. I’m not sold on a Wonka back-story. I don?t need to know why he is as he is; I need no tormented childhood and daddy issues. This new film has more polish but the old film has more togetherness and lasting power.