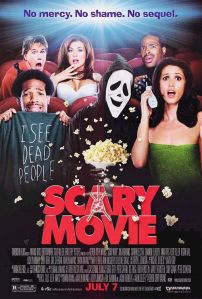 If you can’t stomach crude humor perhaps Scary Movie is not the ideal picture for you. If you’re unsure of things like a geyser of semen that could rival any of the inclement weather in A Perfect Storm, some pubic bush-whacking, or the big screen’s first aural sex scene — then turn away now as fast as you can. But for those hungry for the gross-out laughs of There’s Something About Mary though, Scary Movie delivers in spades.

The story of Scary Movie revolves around a cross-section of the Scream trilogy and the J. Love Hewitt ‘Summer’ escapades. The plot is still kept together with ease but always gives sizable room and advantage for the film’s numerous parodies and slapstick. All of the typical high school clichés are present (naturally played by actors in their 20s and 30s). There’s the loudmouth jock who’s short where it counts (Lochlyn Monro), the busty and ditsy beauty queen (Shannon Elizabeth), the virginal Neve-like innocent (fresh-faced newcomer Anna Faris), as well as countless stoner buddies following the antics of Shorty (Marlon Wayans) among others. Together along with roaming newscaster Gale Hailstorm (SNL‘s Cheri Oteri) and “special” police officer Doofy everyone tries staying one step ahead of our black-hooded fiend’s list.

Scary Movie ruthlessly skewers not only the works of horror author Kevin Williamson but along the road are ‘American Pie’ like teen sex farces and just about anything else you can think of. The lampooning establishes parodies of The Matrix, The Sixth Sense, The Blair Witch Project with a hilarious close-up of Oteri, Amistad, the Budweiser “Wassup” commercials, and one movie I won’t even mention as to not give away one of the film’s best spoofs for a great ending. Scary Movie is a movie rich in laughter of all sorts as well as pure guaranteed shock value. The cast even parodies their own source actors perfectly with Shawn Wayans doing a perfect drooling of Matthew Liliard and officer Doofy as a perfect representation of David Arquette.

Director Keenen Ivory Wayans’ Scary Movie doesn’t just wrestle with bad taste; it gleefully rolls around in it. But that’s exactly how it leaves its audience – rolling with laughter. Scary Movie is easily the funniest movie of the year and will likely stay that way. It’s also the first movie in years that I have actually walked out of with my face aching from so much laughter. Scary Movie will be this year’s word-of-mouth sensational smash as it smashes taboos and taste full-ahead, trust me on this one.