Take a storied franchise that has long been the backbone of Marvel comics and develop it into a feature film where the last superhero movie was the purple-spandex-in-the-jungle The Phantom and you’re just asking for trouble. A nation of fans is breathing down the neck of the film crew nitpicking every fine detail. Studio execs want the film done as fast as possible and under budget regardless of the numbers of effects needed. Despite what would seem like a cataclysmic set-up, X-Men proves that Hollywood can occasionally take a comic book and get it right. For the most part.

X-Men is basically the pilot for a movie franchise. It sets up characters, conflicts, origins, but periodically forgets its audience. Numerous people are introduced and then given a grocery list size of dialogue to read. Some even have atrocious John Watters-like wigs they are forced to wear. It’s a good thing then that the film centers mainly around Wolverine (Hugh Jackman), Rogue (Anna Paquin) and Magneto (Ian McKellen), the three most interesting characters.

Often times the action in X-Men is surprisingly lackluster and contained. The battle royale finale atop the Statue of Liberty might induce more than a few eye rolls. I can’t help but hope that with all the groundwork laid out with this film that the eventual sequel will be more efficient with its action set pieces.

For the most part the dialogue in X-Men is passable and it even has a few rally snazzy sound bites. However, there is that ONE line delivered by Ms. Berry (“You know what happens when a toad gets struck by lightening? The same thing that happens to everything else.”) that is groan-worthy and destined to be notorious.

It may sound like I’m coming down hard on X-Men, but for a comic adaptation it got a whole hell lot more right than wrong. I want to congratulate director Bryan Singer (The Usual Suspects) for the amount of pressure he had looming over his head and what he pulled through with. X-Men is no campy nipple-plate festival but an attempt at possibly serious drama with tortured characters. The whole mutant/racism metaphor may be a little bludgeoned at times but for the most part is handled very well with care. The best aspect X-Men has is its patience. The film is in no rush and takes its time even if it is only like an hour and 40-some minutes. Still, it’s a welcome change in the summer action. 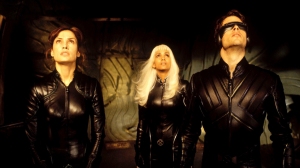 Singer’s direction is smooth and well executed. The casting of the movie is near perfection with some minor exceptions. Stewart and McKellen were born to play their dueling think tank leaders. Jackman is an exciting breakout in a role that was supposed to be occupied by Dougray Scott (thank you MI:-2 delays). I look forward to more from this actor. And does anyone know when young Oscar recipient Anna Paquin became so attractive? Someone buy this casting director a fine steak dinner.

X-Men may have its flaws, one of which is an absolute mundane score, but the film is one of the better summer entries into the world of explosions and noise. I just hope the sequel(s) will be a tad better.