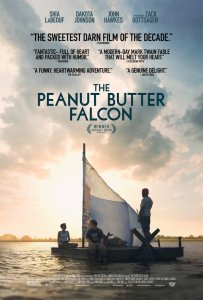 It’s a beguiling little buddy movie about a wrestling fan with Down syndrome (Zack Gottsagen) escaping his care facility, joining forces with a runaway screw-up (Shia LaBeouf) in over his head, and the nursing home assistant (Dakota Fanning) looking to find her charge so they can all sail down the river and meet an old wrestling coach (Thomas Haden Church) who may or may not exist. It’s an episodic journey that hearkens to Mark Twain and 90s indie cinema with its unorthodox family dynamics. The real pleasure of the movie is watching LaBeouf and newcomer Gottsagen bond, whether it be building a raft, channeling larger-than-life wrestling personas, running away from a vengeful criminal (John Hawkes), getting baptized by a blind man, and simply finding time to become friends. It’s one of those “journey, not the destination” films because by the end The Peanut Butter Falcon is nice but rather unremarkable. It’s amusing and sweet but the advertising was filled with heightened exclamations such as, “The sweetest damn film of the decade.” As I sat in my theater, I was wondering if there was something wrong with my ticker; it wasn’t exactly feeling too full from the onscreen proceedings. It felt like there were core elements here that could have been further built upon, further developed, to turn The Peanut Butter Falcon from a relatively good movie into a great one. It’s well acted and the photography of the South can be gorgeous. LaBeouf (American Honey) is genuinely terrific and carries the movie on his back as a beleaguered soul still wounded from personal tragedy. The way he becomes the biggest supporter and advocate for his new friend is heartening without feeling overly trite or saccharine. However, by the end, I didn’t feel too uplifted or moved by the accumulative adventures. I enjoyed myself, but much like a Twain story, it’s more the teller than the tale, and by its winding conclusion I felt like there was too much left behind unexplored.