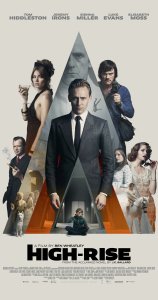 Watching High-Rise left me in an agitated state of bafflement. I was desperately trying to fumble for some kind of larger meaning, or at least some kind of narrative foothold from this indie movie about a high-rise apartment complex where the rich reside at the top and the lower classes below. I was holding onto hope that what came across as messy, incoherent, and juvenile would magically coalesce into some sort of work of satiric value. This hope was lost. Director Ben Wheately’s (Kill List) movie is disdainful to audience demands, disdainful to narrative, disdainful to characters that should be more than vague metaphorical figures against the British class system. The social class commentary is so stupidly simple. At one point, the upper floor rich talk about how they have to throw a better party than the lower floor plebs (slobs versus snobs!). The movie lacks any sort of foundation but just keeps going; I would check how much time was left every fifteen minutes and exclaim, “How is there still more left?!” This is a chore to sit through because it’s so resoundingly repetitive and arbitrary. You could rearrange any ten minutes of the movie and make nary a dent in narrative coherence. There are some striking visuals and weird choices that keep things unpredictable; it’s just that I stopped caring far too early for anything to have mattered. Tom Hiddelston plays a doctor in the building and becomes the intermediary between the oblivious rich and the rabble rousing and vengeful poor. I can’t tell you why anything happens in this movie. I can’t say why the characters do what they do, why the events happen, why anything. It’s all just weightless materials for Wheatley’s empty impressionistic canvas. As society breaks down, things get violent and yet the movie is still boring. I was hoping for something along the lines of Snowpiercer but I got more of a pulpy Terence Mallick spiral of self-indulgent nothingness. High-Rise is a highly irritating and exasperating movie and I know it’s destined to be a future favorite of the pretentious. If anyone says it’s one of his or her favorite movies of all time, please kindly walk in the other direction as fast as you are able and then tell an adult. 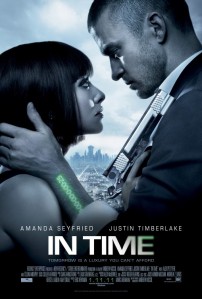 Andrew Niccol is a filmmaker that has earned my respect and my hard-earned money. After The Truman Show, Gattaca, and Lord of War, this guy has me hooked. I forgive him 2002’s S1mone, which had some good ideas in need of a better plot. Lo and behold, his latest film, the sci-fi thriller In Time, falls victim to the same issue. Niccol’s premise is more intriguing than the people onscreen.

In the near future, science has solved the age-old question or mortality, for a price. Every human has an internal clock somehow embedded in his or her arm. It kicks in at age 25 and then people have one year remaining. Time is the only currency that matters. People work jobs to add minutes to their time. When it comes to a cup of coffee or a bus fare, you pay in minutes off your time (a hooker says, “I’ll give you ten minutes for an hour”). The rich are well stocked in time but the poor must fight every day just to keep alive. Sam (Justine Timberlake) works in a factory just to make ends meet. His mother (Olivia Wilde, we should al be so lucky) gives her son an extra 30 minutes for his lunch; humans can “pass” time from one to another through touch. This will come back to bite her. One day Sam meets a tall dark stranger who’s lived for over 100 years and is tired of it all. He donates all his time to Sam. This is a no-no in the future. The timekeepers are a police force, lead by Raymond Leon (Cillian Murphy), that polices time allowances. They’re paid to basically make sure that time remains the property of the upper class. Sam hobnobs with the elites, including Philippe Weiss (Vincent Kartheiser), a man who owns thousands of years. When the (Van Damme-less) time cops come looking for Sam, he makes a run for it, taking Sylvia (Amanda Seyfried) as his hostage. The two eventually fall for one another as they dash across the country stealing time. 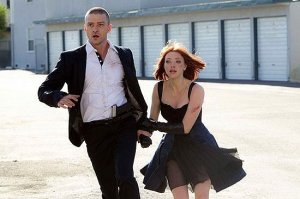 In Time has all sorts of ideas running through its system. What it doesn’t have it much of a plot to go with its heady sci-fi setup. Will is a fugitive but he never really formulates any sort of tangible plan. There’s no higher plot or goal here other than “sticking it to the man” but what exactly does that mean in this context? I understand he’s upset about losing a loved one, but his plan for vengeance or justice or whatever you want to call it lacks needed clarity. It feels like he and his cohort are just making it up as they go along. The film is at its worst when it descends into a populist, sci-fi Bonnie and Clyde, where Sam and Sylvia storm these time banks and redistribute the minutes, becoming heroes to the day-to-day drudgers. The ease that these two people have at knocking over bank after bank, armed only with a handgun, seems hard to swallow. The banks aren’t going to have tougher security especially after word gets out? Niccol adds plenty of chase scenes to fill out his plot but it doesn’t do much more than pad a half-baked story. The end confrontation goes in a direction I shall shamefully describe as “action movie idiocy.” You’re going to tell me that a timekeeping pro doesn’t pay attention when his clock is minutes away from death? Furthermore, I’m stunned that the people onscreen don’t act with more urgency when their time runs out. When death is on the line, I imagine a human being would resort to any kind of irrational desperation just to get a few minutes more, yet In Time shows a demoralized populace that just seems to give up. That makes the heroes-as-revolutionaries storyline even more implausible. Here’s a tip to Niccol: if it’s Sylvia’s last day on Earth, maybe you don’t have her racing for her life in heels. I’d think the gal would have purchased some decent running shoes by this time.

The ideas presented are compelling, though I wish Niccol had continued to push further. The social satire is pretty on-the-nose about the class system. I would have liked Niccol to be more biting in his social critique, perhaps carving up the rich as more venal than pampered. It’s true that they can live forever… unless something violent happens. This may be the future but there’s still no cure for a bullet to the head. The rich may live but they must live in sheltered, insular communities; a life encased in bubble-wrap. There is much potential there that goes unexplored. I also wanted a global sense of what was happening. Is time traded on the stock market? Are there different values placed on human time based upon geography? Is a Japanese life more valuable than a Ukrainian? The glimpses we do get about how the world operates are enticing and clever. The time roadblocks, tolls asking increasing amounts of time to pass into more affluent communities, feel authentic to the world and a cruel way to limit class mobility. When Sam pays for his expensive dinner he tells the waitress, “And take a week for yourself.” The timekeepers are only allotted a day at a time, so they can’t get carried away (I think it’s the futuristic equivalent of having the pizza delivery guy only have twenty bucks on him so he’s less likely to be the victim of theft). For the most part, In Time feels like it has some of the neat sociological quirks down but misses the psychological ramifications of its premise. People stop aging at 25. What does that do to a person’s sense of self? What about the peculiarities of dating? There’s definitely a sexual farce waiting to be written here. But let’s focus on the main dilemma – scrapping every day for just enough to stay ahead of the countdown. It’s an apt allusion to the working poor, but we never really see the tremulous stress that such a situation demands. This is life and death stuff, folks. The panic of inflation should also have been something Niccol paid more attention to. Just upsetting their time budgets could rock people’s world. There’s a lot more human drama inherent in this story that Niccol ignores, or flat out dismisses, for some standard Hollywood frills, namely chases and contrived romances. 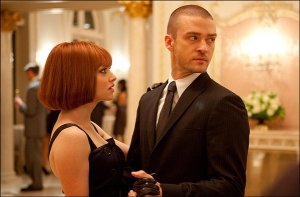 Timberlake has shown that he has some chops when it comes to acting in shrewd supporting roles (The Social Network, Black Snake Moan). His skills aren’t really well utilized by In Time. The role of Sam is pretty bland, lacking edge or depth. This part could have been played by anyone not befitting Timberlake’s genetic credentials. Timberlake can make a credible action hero, though his charm covers up for his lack of intimidating presence. There is one regrettable moment where he wails at the death of a loved one, and it hits the wrong notes and feels laughably awkward. Seyfried (Red Riding Hood) also turns on a dime from being a scared hostage to a romantic partner. Her role gets reduced to being dragged by the hand by Timberlake; she’s human luggage. Murphy (Inception) does a fine job of being a dogged, Tommy Lee Jones-style pursuer. Kartheiser works that reptilian sleaze he’s perfected on Mad Men. The guy is like a younger version of Sam Neill (Jurassic Park, Daybreakers), possibly the most reptilian of all living actors. The strangest part about casting is that it’s an Alpha Dog reunion (Timberlake, Seyfried, and Kartheiser all had supporting roles).

In Time is a better idea than a movie, and it’s an idea that deserves more examination. Niccol’s film has some interesting ideas and concepts, but it seems too slavish to a typical Hollywood blockbuster boilerplate. The characters are pretty bland and the thrills are too. I wanted to spend more time in this brave new time-obsessed world; I just wanted to spend it with other characters. The populist Bonnie and Clyde plotline doesn’t seem to gel. If the rich can control the arbitration of time, why don’t they just ungodly raise the price of things? In a a generation or two, the rich will weed out all lower classes thanks to near literal social Darwinism. The social commentary is a bit heavy-handed and simplistic. I wish Niccol had ditched his young heroes/lovers and explored the particulars of his world more, especially the portent psychological implications. In Time doesn’t feel like a complete movie, just a finished one. Ultimately, the film’s greatest sin may be that it wastes too much of your own time.