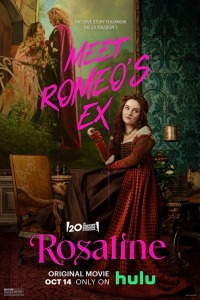 Rosaline is a new romantic comedy in the vein of the meta Rosencratz and Guildenstern are Dead, playfully re-imagining Shakespeare’s doomed romance in a much more light-hearted rom-com tone. For you see, dear reader, Rosaline (Kaitlyn Dever) was the young woman who Romeo (Kyle Allen) was infatuated with… until he met Juliet (Isabela Merched), and then it was all Juliet 24/7. Rosaline is the spurned lover trying to regain her former boyfriend with the help of a handsome suitor and her gay best friend, Paris (yes, the one supposed to marry Juliet away from Romeo in the end). Rosaline is a delight for several reasons, chief among them the quick-witted screenplay by the Oscar-nominated pair Scott Neustadter and Michael H. Weber (The Disaster Artist, 500 Days of Summer) and the eminent charms of Dever as a forward-thinking, snarky, exasperated woman bumping against her society’s demands. Dever makes every joke that much better and is so charmingly diffident. We may know the story of Romeo and Juliet, but the fun of the movie is how it subverts our expectations or presents goofy answers around the peripheral of the main story, like how Rosaline was manipulating actions from afar, sometimes unintentionally. The tragic tone is replaced with something much more cheery and amusing, and that might irk diehard fans of the Bard. I found it to be a winning and irreverent low-stakes re-invention of a literary classic, elevated by charming performances and a beguiling and clever screenplay (I’m giving credit more to the screenwriters than the source material novel, as it had many one-star reviews on Good Reads). For fans of Shakespeare adaptations with a feminist twist, check out Rosaline and fall under its star-crossed spell.