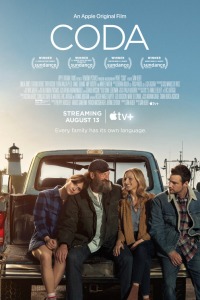 Ruby Rossi (Emilia Jones) falls under the category of CODA, a Child Of a Deaf Adult. Her mother (Marlee Matlin) and father (Tony Kotsur) and her older brother (Daniel Durant) are all deaf, and she is the only member of her household with the ability to hear. She’s balancing working for her family on their fishing trawler, maintaining good grades in school, and possibly pursuing scholarships to enroll at a music and fine arts college for singing. Ruby’s music teacher agrees to train her because he believes in her potential, but Ruby has to worry that her dream is something that cannot be shared with the people she loves most, and how would they all get on without her?

The framework of CODA is familiar to anyone who has watched a coming-of-age story or family drama, but it’s the conviction and strength of character and sheer force of empathy that makes this movie a standout film for 2021. It’s based upon a 2014 French film, The Family Beller, and follows many of the same beats from other sentimental family dramas about sticking out in your family and society, chasing your dream, often in conflict with your family’s expectations, gaining that sense of inner strength and resolve, and mending differences in perspective with hard-fought and well-earned wisdom. It’s familiar, but that doesn’t mean under the right set of hands that it cannot still be resonant and emotionally gratifying. I do not hold the familiar formula against CODA, even as the family’s goal and her personal goal come into direct conflict in sometimes forced manners. That’s because the movie does an excellent job of establishing these people as characters, establishing the family dynamic as fraught but loving, and establishing a conflict that is direct and clear as far a major point of separation. 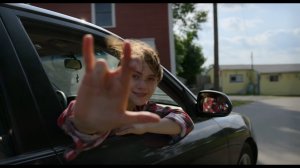 Ruby isn’t just the only member of her family who can hear, she’s also their vital lifeline to the outside world. She’s looked upon as the family interpreter, a position they cannot afford to pay for someone else’s services so the duties and responsibilities fall upon her. That’s so much pressure to bear for one teenage girl, knowing that she’s the link between her family’s poverty-treading existence and possibly breaking free into a larger hearing community. She feels ostracized and awkward within her own family and outside of her own family. To the rest of the school, she’s that “deaf family girl,” and it’s remarked that when she began high school she had an accent reminiscent of what deaf people can sound like, a point that her peers cruelly imitate. She worries she will forever be defined by her family’s disability even if she doesn’t share it. However, within her family, she feels ostracized because she’s different. She wonders if her mother wishes that she too were deaf, and during a heartfelt late-night talk, mom actually admits that upon her daughter’s birth she did feel disappointment when Ruby had hearing. While she knows sign language and has grown up with these loving figures, she’ll still always be the one who’s different, the one who hears the insults her family cannot.

The film does a remarkable effort about contextualizing Ruby’s fears and frustrations of being held captive in two different worlds, neither feeling fully accepted or whole, and that’s why her embarking on a personal dream that her family can never fully appreciate feels so significant. Part of Ruby might feel that singing is selfish, especially if it means limiting her family’s upward mobility by eliminating their unpaid interpreter, but it’s the thing that makes her most happy, a special gift that her family will be excluded from. There’s a wonderful moment toward the end of the movie where Ruby’s father asks her to sing to him, and he puts his hands along her shoulders and neck to feel the vibrations, and his awed and tear-stricken face is so moving, as he so desperately wants to indulge too in the beauty of his daughter’s voice. While occasionally the film goes overboard pounding these two conflicting paths into forced collision (family vs. self), the movie is personal with its big problems and personal with its big triumphs, making it transcend the trappings of formula. 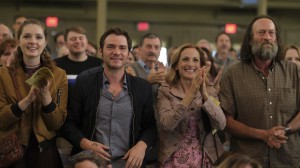 Writer/director Sian Heder got her start on Orange is the New Black, and that TV series’ hallmark has been its enormous sense of empathy for its diverse characters. This is evident in Heder’s screenplay and her observational, detail-rich simple storytelling that immerses you in this world, so even while you recognize more familiar made-for-TV plot turns, the genuine authenticity makes the movie feel like its own unique story. Heder’s direction is delicate and places the attention squarely on her performers. There is one stylistic move late in the film when Ruby’s family comes to her choir recital in support. They look around for cues when to applaud, and their minds wander as they sign about other menial topics like grocery lists, and you understand why once Heder drops you into their perspective. For a minute, the sound disappears, and you’re left studying facial expressions for cues like them. While we can imagine being deaf, it’s another matter to experience it and try and understand.

The acting is another laudable merit for CODA. I personally want three Oscar nominations for this clan, Jones (Locke & Key) for Best Actress, Matlin (Children of a Lesser God) for Best Supporting Actress, and Kotsur (Wild Prairie Rose) for Best Supporting Actor. Over the course of nine months, Jones learned American Sign Language and how to sing, which is surprising because I would have said she has a natural talent with singing. Her performance, as well as Matlin and Kotsur, feel so real, so nuanced, and so natural, like we’ve plucked these people from real life and given them this platform. It’s the best credit you can give an actor, when they seemingly disappear into the character, and the character feels like a fully breathing, flesh-and-blood person. Even the small supporting roles are well cast, well acted, and contribute to the overall authenticity of the movie. Unlike the 2014 French original movie, all of the deaf members of the family are portrayed by actual deaf actors as well.

CODA was a sensation at the 2021 Sundance Film Festival, with Apple Films buying the rights for $25 million dollars, and it’s easy to see why because it’s such a satisfying, enriching crowd-pleaser and legit tear-jerker. There were several points that had me tearing up, and then fully crying, because I was so emotionally engaged with the family, their struggles, and their triumphs and outpouring of love. You might be able to see where the movie is headed because its template is familiar and formulaic, but it’s the execution, the attention to detail, and the level of observational attention that elevates CODA and makes it so winning and so heartwarming.