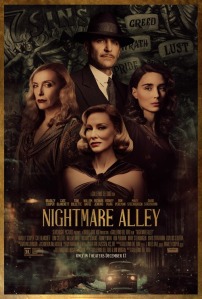 I’ve now watched both versions of Nightmare Alley, the 1947 movie and the 2021 Guillermo del Toro remake, and I guess I just shrug at both. Based upon the 1946 novel by Lindsay Gresham, we follow an ambitious yet troubled man, Stanton (Bradley Cooper), who finds refuge in a traveling carnival, mentors as a phony mentalist, and then uses his skills of manipulation to fleece the rich and privileged while possibly losing his own soul in the process. I kept watching this 150-minute movie and waiting for it to get better, to hit another level, and I had to keep asking, “Why isn’t this playing better for me?” It’s del Toro, an early twentieth-century freak show, a dashing of film noir, and a star-studded cast (Cate Blanchett, Willem Dafoe, Rooney Mara, Toni Collette, David Strathairn), and all those enticing elements should coalesce into something special and dark and adult and transporting, like del Toro’s 2017 Best Picture-winning Shape of Water. However, for me it just feels so turgid and overly melodramatic. I wish the movie had stayed with the traveling carnival and the colorful weirdos that it ditches halfway through. I think it’s because the movie plays to your exact expectations. You expect it to be beautifully composed, and it is, with a flair for the grotesque, a del Toro specialty, and the beats of its film noir-heavy story with femme fatale and double crosses comes across so predictably but minus substantial depth to compensate. I kept waiting for the themes to deepen, to be a better reflection of ourselves, but it’s one man’s circular downfall that doesn’t play too tragic because he’s already an unrepentant scoundrel. Cooper also just seems too old for the part, especially when everyone refers to him as a “young chap.” You might not see a better looking movie from 2021. The cinematography, production design, costumes, and stylish panache that del Toro trades in are all present and glorious to behold. I just wish I could get more from Nightmare Alley besides an admiration for its framing and less about what is happening to the characters within such doting artistry.