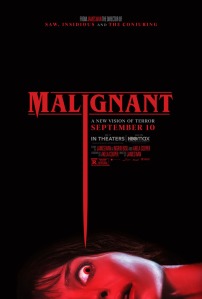 Thank goodness for James Wan. The horror hit-maker has earned enough creative cache in the industry after fostering three separate horror franchises (totaling near two billion dollars), plus two other high-profile action superhero blockbusters, that he can do whatever he wants and thankfully what Wan wants to do is make really weird movies that take tremendous risks. Malignant is a movie that starts slow, appearing to be another in the line of horror thrillers about a psychic connection between a troubled soul and the imaginary friend that seems to be coming back. The movie begins feeling like high-end camp in a flashback, takes a very serious and uncomfortable turn into domestic violence and miscarriages, and then builds into a psychic serial killer investigation where our main character (Annabelle Wallis) is having creepy visions of the killer exacting bloody revenge. For the first half of the movie, there’s a lot to keep up with and it’s easy to get confused with bland characters, their often baffling actions and decisions, and then it plops you down for heavy exposition via asylum VHS tapes. However, from that point forward, Wan lays out all his cards and it’s so absurd, so entrancingly weird, and so enthusiastic about all of it, that you may burst out laughing in the best possible way. Before its drunken rampage of schlocky delight, Malignant is a horror mystery and stylishly directed with some bravura shots and angles. It’s worth your time, but everything is in service to setting up the final act where it gets so much bigger, more bonkers, and deliriously more entertaining. Wan is clearly going for messy giallo horror camp and gives the audience permission to laugh along with the insanity. It acknowledges how goofy looking and bizarre its eventual monster looks, let alone the logistics and circumstances involved, and it all veers into that. Whereas Old felt like M. Night Shyamalan was trying to escape camp and kept falling back into its morass, Malignant feels expressly like the movie James Wan wishes to make. There’s even a spooky abandoned child experiment-heavy hospital on a cliff, and rather than have something spooky happen, the character then safely arrives back home with an armload of incriminating medical VHS tapes. The deliberate asides, misdirects, and eventual revelations feel so purposeful to yank around the audience and deliver a frantic and unpredictable ride of a movie that leaves the audience screaming and howling with laughter. I can understand people hating Malignant. I can understand people loving Malignant. I can understand people having trouble even making sense of Malignant. However, you cannot watch this movie and have a passive response. I wish I could have seen this in a packed theater pre-COVID. I think I figured out my inexpensive Halloween costume for 2021.