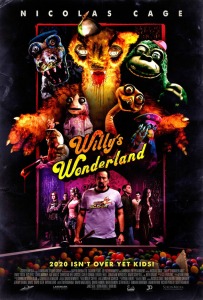 I wanted to love Willy’s Wonderland. It’s easy to see the pitch: Nicolas Cage in Five Nights at Freddy’s. That sounds like everything you would need for a gonzo movie experience with, hopefully, an unrestrained Cage. The problem with Willy’s Wonderland is that it seems to have peaked at its inception. I’ll credit the creature designs of the many killer animatronic animals inhabited by the spirits of a dead Satanic cult demanding sacrifice. They’re chintzy and creepy and effective in their Chuck E. Cheese/Freddy’s reference points. However, the movie clearly appears to be out of ideas pretty early. Cage plays a janitor hoodwinked into working overnight at the abandoned pizza parlor and he doesn’t say a word for the entire movie. For those looking for the splendidly crazy moments that can define Nicolas Cage performances, I think you’ll be slightly disappointed. The character has a few quirks, like his surprisingly ironclad work ethic, but the character is just as underwritten, absent personality, and replaceable as any of the killer robots. For a movie where Cage fights a bunch of bloodthirsty robots, it starts to get a little boring because of the narrative redundancy. Toppling one robot after another feels too easy and the specific set pieces are unmemorable. There are a slew of highly annoying teenagers that stumble in so there are more victims to be terrorized. In one moment, these teens will denounce doing stupid acts and the unreasonable risk, and then the next minute they’re splitting up to go have sex in the scary birthday room or murder and not keeping their distance from the murder robots they know are alive and murderous. If the movie was more satirical, I might even give the filmmakers credit for the dumb teenagers reverting to form regardless of obvious circumstances. My disappointment is that what you get with any ten-minute segment of the movie is generally the same thing you’ll get with any other portion. It’s a lot of the same. Is that consistency or a lack of development and imagination? The movie still presents some degree of fun because that premise is enough to at least hold your attention if you’re a fan of horror, Cageisms, and movie kitsch. However, Willy’s Wonderland could have used more drafts and variety to really tap into the sheer gonzo potential of its ridiculous pitch.