She Dies Tomorrow has unwittingly become a movie of the moment, tapping into the encroaching anxiety and paranoia of our COVID-19 times in a way where the horror of newspaper headlines and existential dread has been transformed into a memetic curse. The new indie thriller is an uncanny and unexpected reflection of our uncertain times and it makes She Dies Tomorrow even more resonant, even if writer/director Amy Seimetz (Upstream Color, 2019 Pet Sematary) doesn’t fully seem to articulate her story. We’ve dealt with curses in films before and we’ve dealt with foreboding omens of impending death, but how would you respond if you knew, with certainty, that you were going to die the next day? How would you respond if you knew that your existence was itself a vector for this mysterious contagion and that by telling others you are dooming them to the same deadly fate, as well as their loved ones, and so on? Sure sounds similar to a certain invisible enemy that relies upon communal consideration to be beaten back but maybe that’s just me.

Amy (Kate Lyn Sheil) is a recovering alcoholic who knows, with complete certainty, that she will die the next day. Her boyfriend killed himself after saying he was cursed to live one last day, and now she’s convinced the same fate awaits her. Her sister Jane (Jane Adams) is worried about her  mental state and then becomes obsessed with her warning. Jane then believes she too will meet the same fate, and discusses this to her brother (Chris Messina) and his wife (Katie Aselton) and two of their dinner guests. Each comes to believe that this deadly declaration is true. They must decide how to spend their remaining hours and whether the curse spreads beyond them.

It seems like with Color Out of Space and The Beach House, 2020 is the year of movies where characters slowly succumb to forces beyond their understanding and that they cannot overcome. Halfway through She Dies Tomorrow, we have a half dozen characters that have been infected, and we watch how each respond to the recognition of their impending doom. One man wants to take care of personal decisions he’s been postponing. Another decides to come clean about wanting to end their relationship. Another debates whether it’s more humane to allow their child to pass in her sleep rather than rouse her to expire aware and conscious. That’s the kind of stuff that is intensely interesting, allowing the viewer to question what their own decisions and thoughts might be under these unique circumstances. I also liked that Seimetz keeps some degree of ambiguity (though perhaps too much for her own good). The curse is never fully confirmed. Could it simply be people going crazy and giving into a mental delusion that their fate is decided beyond their governance? Could they all be hypochondriacs giving into their worst fears and finding paranoid community? Is there a relief is adopting self-defeating fatalism?

The slow, fatalistic approach of the storytelling and the spread of the curse channels the crushing feelings of depression and helplessness, an emotional state many can identify with right now. There’s a heaviness throughout the movie that feels like an oppressive existential weight. As soon as these characters recognize the truth of the “I’ll die tomorrow” creed, they don’t fight. They don’t run. They don’t even rage against the unfair nature of their imminent demise. There isn’t a cure or even a mechanism for delay. The rules of the curse are fairly vague but it seems to follow the specifics of once you’re been exposed to an infected individual, and they mention their own impending death, that this starts the clock for your end. The characters lament how they’ve spent their lives, what they might like to have done differently, and come to terms with some marginal level of acceptance. Amy wants her body to be turned into a leather coat after she’s gone. Another woman opines how much she’ll miss trees, something that she took for granted. Another character marvels at the beauty of the sunset, which will be his last, drinking in the natural splendor with a new appreciation that he never had before. One woman says she regrets spending so much of her days talking about dumb nonsense, and then her firend disagrees, saying he enjoyed her nonsense and it brought him laughter. Taking stock of a life, there will always be regrets that more wasn’t accomplished or appreciated, and many of these same characters are determining how to spend their last hours, whether they prefer a partner or going it alone. In that sense, She Dies Tomorrow reminds me of the mopey indie version of Seeking a Friend for the End of the World or the more palatable, less operatic version of Melancholia. 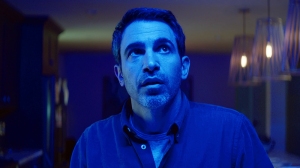 At barely 90 minutes, this is also a very slow and meditative movie that will likely trigger frustration in many a viewer. I’ll admit that my mind wandered from time to time with some of the, shall we say, more leisurely paced segments or redundant moments. There is a heavy amount of ennui present throughout here, so watching a woman listen to the same classical record, or laying on the floor in a catatonic daze, or staring off uninterrupted into the middle distance adds up as far as the run time. There isn’t much in the way of story here to fill out those 90 minutes. Amy infects her sister, who infects her brother and his wife, and from there they all deal with their new reality. From a plot standpoint, that’s about all She Dies Tomorrow has to offer. It has flashes of interesting character moments, like the couple who talk about their long-delayed breakup, or the couple discussing the ethics of letting their child die in her sleep, but too often the movie relies on mood over story, letting a numbing futility wash over the characters and conversely the audience. I’m not saying that mood can’t be the priority. It feels like apocalyptic mumblecore but with a screenplay with too much internalization to really take off. It can seem like an overextended short film. I can’t help but feel that Seimetz is just scraping the surface of her story potential and that these characters could have been even more compelling if they were given more than resignation.

Sheil (Equals, House of Cards) gives a suitably withdrawn and shell-shocked performance. She reminded me of a cross between Katherine Waterston and Dakota Johnson. The other actors, including familiar faces like Josh Lucas and Michelle Rodriguez, all adjust their performances to fit the tone and mood of this world, which means much is dialed back. I wish I had more moments like when Aselton (The League) viciously unloads what she really thinks about her aloof sister-in-law. The cast as a whole feel overly anesthetized, a bunch of walking zombies bumbling around the furniture, and while it’s within Seimetz’s intended approach, it does drain some of the appeal from the film.

Given the overwhelming feeling of daily unease we live with during an ongoing pandemic, I can understand if watching a movie like She Dies Tomorrow doesn’t exactly seem desirable. It can prove engaging while also airy, navel-gazing, and adrift. It’s several big ideas spread thin with overextended melancholy and nihilism. In a way it reminds me of 2016’s A Ghost Story, another indie reaching for some big statements about the human condition and grief and our sense of self and legacy. But that movie didn’t quite have enough development to make those ideas hit. Instead, I’ll remember it always as the Rooney Mara Eats a Pie For Five Minutes movie. There’s nothing quite as memorable, good or bad, here with She Dies Tomorrow. It’s mildly affecting and generally interesting, though it can also try your patience and seems to be missing a whole act of development. If you only have one more day to live, I wouldn’t advise using your remaining hours on this movie but you could do worse.