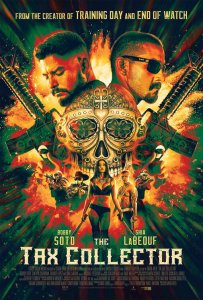 If you had told me that The Tax Collector was a parody of writer David Ayer’s hyper masculine, lurid, crime-ridden jaunts into the slums, police stations, and domestic lives of criminals, I would have completely believed you. We’ve been here before, with Ayer’s End of Watch, Street Kings, Harsh Times, Dark Blue, Training Day, even the fantasy-mingled Bright looked like an Ayer battleground of gangs, crooked cops, hypocritical politicians, and godly family men who someone can justify the heinous acts of violence they do. This time Ayer is following a pair of gangsters that make their monthly rounds to collect their dues from the other gangs. Their big boss, The Wizard, is rotting in jail, and a rival gangster, who also is literally a cannibalistic Satanist, takes the opportunity to make a violent power play. First off, this is nothing you haven’t seen before. It’s more bad men barking threats at those they feel are underneath their authority, then lots of driving banter meant to endear us to these bad men, and then professions of how much they love family or God. With the main villain being an avowed occultist, the battle-line takes on a biblical sense or good versus evil. The problem is that I didn’t care about a single character nor did I find them interesting. For a solid hour, we’re watching David (Bobby Sotto) and Creeper (Shia LaBeouf) go about their collections, argue about theology and diet, and reminisce. These guys are not interesting and more place setters for more compelling characters to be developed in later drafts that never took place. There’s a paucity of thrills and action and general tension to be had here. It’s shoddily paced. When things do pick up and The Tax Collector becomes a grisly revenge tale, the villains are so easily toppled, and in such unmemorable ways, that you understand why Ayer was putting all this off. During a bathroom brawl, the action stops for a pointless flashback to see Bobby in his martial arts class, but when he comes back he smashes a guy’s head with a toilet cover. That wasn’t a martial arts move he learned. It’s strange moments like that where The Tax Collector feels more like an old, incomplete screenplay Ayer had locked away in a drawer, a rough collection of his bombastic machismo crime thriller tropes that barely tops 80 minutes. The only passion on display is from LaBeouf, who reportedly got an entire chest tattoo for his character except his exposed chest is never clearly seen once on camera. I don’t even know why he wasn’t the main character. Bobby is boring as the humdrum hoodlum who wants out of the family business (Michael Corleone he is not). A late twist is meant to be revelatory but, beyond being predictable by the economy of characters, signifies little for Bobby. The Tax Collector is awash in the same grimy gangland stereotypes that have populated most of Ayer’s professional work, but rarely has his moral ambiguity, nihilism, and envelope-pushing “rawness” felt more like self-parody. This is a thriller bled dry.