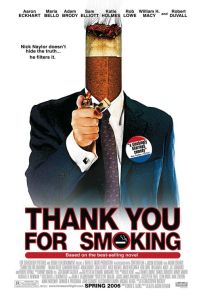 As soon as I saw a trailer for Thank You for Smoking I was in love. I found the book for cheap and read it with months to spare before the film reached my local theater. Admittedly, my expectations were high because the book was wonderful, and Thank You for Smoking as a movie is equally wonderful and a very good film adaptation.

This is a wickedly funny satire that skewers all sides in the political debate about Big Tobacco, and the film doesn’t take a stand, which is refreshing. It has a firm grip on its humor and gleefully gives its finger to political correctness. There?s a lunch group called the M.O.D. (Merchants of Death) squad where reps for Alcohol, Firearms, and Tobacco, of course, argue over whose product is harder to spin. It’s likely the snort-because-you-can’t-believe-they-said-that movie of the year. The tar-black humor in Thank You for Smoking rolls off so casually. This is a comedy that respects the intelligence of its audience and doesn’t dumb down its barbs or its satire. Aaron Eckhart was born to play the role of Nick Naylor, tobacco’s master spin artist and public charlatan. Naylor is conniving, slippery, and yet immensely likable not in spite of these traits but because of them. Eckhart is downright charming and you can see how he could dupe a nation, even if he’s only doing it for the challenge. Thank You for Smoking has one of the finest assembled casts in a long time, and every member fires on all cylinders. This is a film brimming with confidence and it’s evident with every frame. You almost might feel guilty for wanting to capture a contact buzz from how polished, assured and witty the flick is.

I never thought I’d say so but it sure looks like adapter/director Jason Reitman has a far more promising future right now than his dad, Ivan. Jason, the son, keeps the movie brisk, packed with characters, subplots, jokes, and a visual whimsy. This is a terrific adaptation of a terrific book, and Reitman really hones in on the mechanics of debate and lobbyist practices with aplomb. A scene where Nick teaches his adoring son the tricks of debate with ice cream is outstanding. Thank You for Smoking crackles with dialogue to die for, like Nick’s boss BR (J.K. Simmons) saying, “We sell cigarettes. They’re cool, and addictive, and available — the job is practically done for us.” My only complaints with the film, besides that it’s too short at just 90 minutes, is the manufactured danger seems a bit too slight and too easily overcome. Nick quite simply vanquishes whatever threat his reporter sex buddy Heather (Katie Holmes) posed. Otherwise, Thank You for Smoking is a superb movie all around and there’s no reason you shouldn’t see it. Take the hit.