In 2012, after the found footage superhero movie Chronicle became a surprise smash, director Josh Trank was at the top of Hollywood’s hot new director list. Within three years, he was a pariah. The production behind 2015’s Fantastic Four was so troubled and fraught with reshoots, creative clashes, and secret edits that Trank was labeled as a malcontent who couldn’t be trusted with the big tentpoles. He was unceremoniously dumped by Star Wars and seemed to become the latest casualty of an industry that eats its own promising wunderkinds. I’d highly advise people read a very illuminating in-depth article from Polygon on Trank’s troubles and triumphs, including his insights on where Fantastic Four went awry. Trank spent years honing his next script, an Al Capone biopic of his late years, and waiting for star Tom Hardy to be available. Some critics have called Trank’s comeback movie a self-indulgent, surreal, campy mess, and indeed while I was watching I had visions of Mommie Dearest. However, that wasn’t a bad thing, at least for me. I cannot call Capone an unqualified success but I appreciated the bizarre lengths Trank goes to make a biopic that mocks and tears away the mystique of its macho idol.

Capone (Hardy), or “Fonze” as he’s referred to primarily, has been released from his prison sentence for tax evasion and living the rest of his days on his Florida estate. He’s suffering dementia from the effects of neurosyphilis, a condition he contracted as a teenager. His wife, Mae (Linda Cardellini), tries her best to keep him from harming himself or others. The F.B.I. is still listening, still watching, and newspaper reporters are still hiding along the bushes. Capone struggles to keep his mind from being completely lost but will lose, dying at age 47. 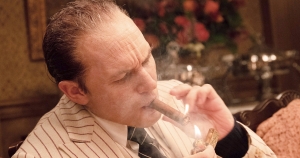 First off, I think Trank’s initial creative approach is a genius way to explore a biographical film, running through the major points of a subject’s life in a hallucinatory, non-linear fashion that mixes fantasy and reality. From that standpoint alone, Capone is never boring because it can quite literally go anywhere as Capone retreats further and further into his fraying mind. That’s such a visually stimulating way of telling a story while also presenting a chaotic impression of a character’s perception, locking us into an empathetic experience with an unreliable guidepost. I think that alone makes Capone worthwhile, as does Hardy’s go-for-broke performance (more on that later). It’s a weird fever dream of a movie, constantly shifting between past and present, fantasy and reality, and I think this perspective adds much to the film’s appeal and ambition. One second the man is sitting down with FBI agents and the next he’s wandering a ballroom to go onstage with Louis Armstrong for a New Year’s Eve duet. It gets pretty crazy and that’s good.

I was wondering if Trank would glorify his title subject. I only had to wait for the first twenty minutes where Al Capone literally craps himself twice for my answer. This is not Capone at the height of his fearsome power where he ruled the Chicago ganglands; this is a decrepit, doddering middle-aged man, equally helpless and reckless, unable or unwilling to even control his bowels. He is rotten from the inside out, a vile human being whose own filth is leaking out to smother him. Gangster cinema has often glamorized the mafia and criminals as unorthodox folk heroes, like in 1967’s Bonnie and Clyde and the more recent Public Enemies in 2009. So, with all of that said, I enjoyed that Trank took a legendary figure of the criminal underworld and totally undercut his machismo power. He strips away the romantic notions of the man’s life. This isn’t the man on the pulpy radio dramas, this is a guy who craps the bed. Martin Scorsese’s The Irishman got plenty of acclaim for spending its final half-hour showing where a lifetime of crime leads its elderly protagonist, a sad, lonely life without any lasting personal benefit. Trank takes that much-heralded final half-hour and turns it into an entire 100-minute movie. I wish more movies would do this to deserving subjects. 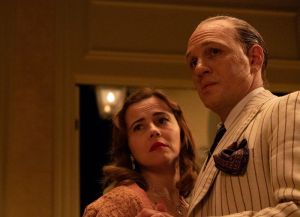 The biggest draw of the film is Hardy (Venom, The Revenant) who never met a film role he couldn’t grumble, mumble, growl, or unleash a funny voice for. To say he is committed does not to do the man justice. He is not only chewing scenery; he is rapidly inhaling it. He is playing to the cheap seats with this role, bloodshot eyes bulging out of his head with thousand-yard stares of confusion and paranoia. He’s barely intelligible at times, and that’s before he has a stroke that further impairs his ability to communicate. He can also be hard to recognize under layers of pock-faced makeup. The acting-with-a-capital-A style is so enthralling but perhaps not for the exact intended reasons. It’s fascinating to watch a highly respected, Academy Award-nominated actor just indulge every over-the-top impulse and tic, where each small decision feels like generating the question, “Really, you went with that choice?” The batty performance brought to mind Faye Dunaway’s breathtaking performance in 1981’s so-bad-it’s-good Mommie Dearest as Joan Crawford (she thought she was going to in awards for that performance!). It’s a level of camp with no earthly reservation, and it’s rare to see from such a famous actor, and I was spellbound. If you enjoyed Mommie Dearest for its unintentional camp hilarity, then Capone might be just for you.

While at turns confounding and fascinating, Capone falls short when it comes to examining the inner life of its title character. I assumed with the conceit of losing touch with reality that Capone would be experiencing some reckoning over his past misdeeds, and this happens to a very mild, opaque degree. There are some supporting characters that turn out to be, surprise, ghosts that Capone had killed in his past. But they stop there, failing to provide an opportunity for Capone to feel remorse and they don’t even push him on being guilty. You would think a man with a sizeable list of dead people he’s responsible for would be haunted by more ghosts from the past, forcing him to reconcile his idea of himself with his tortured deeds. Capone is also seeing images of a young boy that is meant to represent his poor youthful upbringing, but he doesn’t interact with this past representation other than look uncomfortable in his presence. The movie desperately needed more introspection with this man examining his sins and legacy and validations. A bad man coming to terms with the end and what it means has great dramatic potential. A bad man who bumbles around his luxurious home, sees some ghosts, and continues bumbling has less so. That’s where Trank’s screenplay really falters because it doesn’t push harder. Capone is too caught up in upending the image of Al Capone rather than digging deeper into the man himself and his inherent end-of-life drama.

The supporting characters also do little to offer alternative sides to better know Capone. His long-suffering wife is nicely played by Cardellini (Green Book), brought to tears watching her strong man waste away, calling her an angel one minute and forgetting her face the next, but we don’t learn more about the central figure through her. He started poor. Got power. Now he’s incompetent (and incontinent). That’s it. There’s room for more here than a man physically and mentally falling apart. What about the other people in his life? What about plans for succession from those who spent their lives in his service? There’s even a storyline of a lovechild trying to get in contact with him and the movie miraculously does nothing with this abandoned son to add further dimension and insight.

I would be lying if I said I wasn’t laughing throughout Capone, though I think Trank is intending some degree of mockery with his biopic that plumbs the depths of the strange and grotesque. There’s a guy who gets stabbed in the neck maybe 50 literal times. There’s Capone shooting alligators, convinced they’re conspiring to munch on his testicles. There’s Capone applauding and singing along to The Wizard of Oz and arguing for the sake of the Cowardly Lion. There’s an ongoing subplot about different supporting characters trying to somehow sift the location of Capone’s hidden millions from his broken mind like a treasure hunt. There’s an entire sequence where Capone, with carrot-as-cigar in mouth, marches around firing a golden tommy gun while his saggy adult diaper droops around his waistline. In short, there’s more than enough material here to enjoy on a strictly ridiculous, pulpy, heightened to the point of breaking campy variety. Hardy is fully unrestrained, for better and worse, but he’s always watchable, as I would say of the film itself. Even if it feels ultimately superficial and underdeveloped, Trank’s Capone is a mess of bad taste about a bad man going through some bad times and it just might be the good kind of bad.