Late Night follows the fictional long-running TV talk show host Katherine Newberry (Emma Thompson) who has been informed by her network exec that his current season will be her last season. She will be replaced and the show will be retooled. Along comes Molly (Mindy Kaling), an aspiring comedy writer who works in a chemical plant. She’s hired on the spot to serve as a token and offer more diversity in Newberry’s all white, all-male writers room. She has to find herself, find her voice, stand up for herself, and try to get the show to change with the times if it’s going to potentially survive the eager network axe.

For fans of the inner workings of show business, and the ups and downs and push and pull of creatives, Late Night was made for you. I’ve always been fascinated by the nuts-and-bolts of creative ventures in the entertainment industry and especially a writer’s room where people hash out ideas, build out a storyline, and generally bring our TV to life. I enjoyed the short-lived show where Jim Rash would interview different TV showrunners about their writer’s room processes and how they would resolve creative decisions. It’s one reason I loved HBO’s The Larry Sanders Show, a deeply satirical and self-deprecating look at the bowels of Hollywood. So if you’re like me and enjoy the inner workings of creative people working in tandem, then Late Night is already starting on fertile ground for you. Kaling’s world is informed by her years of television writers room experience, as well as running her own show, and that experience better informs the reality of Late Night, from the joke-writing process, to the wariness of content that may push away sponsors, to the means of staying relevant in a vastly changing landscape of how people get their media and entertainment. You feel Molly’s sense of triumph, and disappointment, when her first joke is placed into the monologue and then removed. The movie feels informed and real to its tiniest detail, which makes it all the more interesting.

The film is consistently funny because Kaling is writing with such a sharp grasp of her characters. Right away the dynamic between Katherine, a cynic with an acid tongue, and Molly, an idealist but a novice who is pushing for reforms, establishes so much wonderful conflict and eventual resolution. It’s universally enjoyable watching a character come into her own, transform the lives of others for the better, and to have characters who butted heads form a mutual friendship and understanding. That’s all present, but with Kaling’s command of writing the characters come first. They drive the story, and while the destination is rather predictable with this sort of thing, that doesn’t make the journey any less satisfying. The character of Katherine Newberry is interesting because she’s a woman who has established her own perch in late night, but she’s still older, white, and from an elitist, privileged bubble. She’s stuck in the middle, which makes her such an interesting character to explore and push into new territory. Kaling has mined some talk show headlines for her story’s drama and it doesn’t feel cheap. Past mistakes are given weight and force characters to reckon with them in a way that acknowledges the extent of the ramifications and the people that have been hurt. Kaling also has a generous sense of writing for her supporting players, giving many a small moment to make an impression and enough for serviceable secondary character arcs.

There’s a definite message afoot with Late Night and it goes about it in a way that makes it far more accessible — as entertainment. Rather than dragging out a soapbox, the movie does the smarter ploy by demonstrating why a homogeneous writers room of the same kind of voice/perspective can be limiting and potentially regressive. Molly is the long-overdue change agent to the show, to the characters, and to the old ways of thinking of what television, and by extension the entertainment industry, had to be simply because it had always been that way. The film’s sense of advocacy for representation is strong and a central tenet, but this doesn’t get in the way of telling a good story with enjoyable characters. By demonstrating through its tale, Kaling has smartly packaged her movie as an empathy test designed to expand the perspectives of its audience, to get them to think how difficult it may be for a woman, let alone a woman of color, to find work in her chosen field. It’s the kind of movie you could take your grandparents to and have them nod along in approval.

Allow me to get a little personal here as I reflect on the topic of representation. I think recognizing one’s self and one’s stories is a huge deal. The power of empathy is potentially endless but that doesn’t mean that all stories need to be told from the familiar template of a straight white dude encountering conflict and change. With good storytelling, anybody can feel for anybody’s plight, but that doesn’t mean that those in the industry should stop trying to give voice to others who have historically been marginalized. TV, and particularly late night TV, is something of a boy’s club and needing more women. A recent analysis on late night TV concluded, with the exception of TBS’ Samantha Bee, that the typical late night talk show writing staff is only one quarter female. More people deserve more opportunities to shine because we, as a society, benefit when we have a plurality of stories from a plurality of voices and perspectives. It makes us all better. 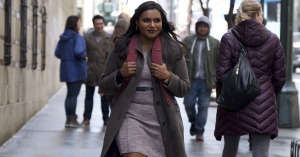 During the summer of 2018, I wrote a rom-com Web series (The Spirit Inside Me) that was told from the perspective of a bisexual woman and dealt with an eventual romance with another woman. You better believe I consulted with my queer friends to make sure every script didn’t feel like it had been written by a straight dude. Then we started to make it a real thing throughout the fall and winter of 2018/early 2019, and the mission statement of the series, and for me, was to try and get as many women involved in the production as we could. There were nine total episodes and I wanted to try and line up as many female directors as possible (if able all of them would be directed by women). Our show was from a feminine perspective, concerning an unorthodox LGBTQ relationship, and I wanted a feminine perspective to imbue as many facets of the production as possible. We put out notices for crew and emphasized that we were looking for women first. You would have thought I had just insulted people’s mothers the way some men responded back. They told me this was “reverse discrimination” and insulting and that the best talent should win out. I dismissed these whiny grievances and continued to seek and hire women. I know many women, even in our small community of filmmaking, don’t get as many opportunities as men. I wanted to give them those experiences. I felt it would make our series better and, personally, it just felt like the right thing to do because I could. With the show currently in editing (stay tuned!), it’s actually one of my happiest decisions as I really enjoyed seeing several women rise to their opportunity and shine. I’m not writing this to pat myself on the back or seek woke plaudits. This is such a slight example of mine over the overwhelming obstacles women face breaking through in a male-dominated industry that doesn’t want to share, but I felt it was worth sharing, dear reader.

Late Night was a movie that kept me smiling and feeling good all over. It warmed my heart, it made me laugh, and it gave me a group of characters to latch onto that earned my affections. Thompson is tart and witty and wonderful. Kaling is lovable and charming and hopeful. They make for a dynamic, combustible combination. Late Night is a fine example about the benefits of diversity, representation, and empathy, and it’s also a cute and funny movie that will make you happy by the time the credits roll. Tune in.