Oscar-winning filmmaker Damien Chazelle got to be the director of a Best Picture winner for approximately three minutes, which, to be fair, is more than most us will ever experience. La La Land won the top prize at the 2017 Oscars only to have it taken away and given to the smaller indie, Moonlight. Where an Academy of old white people that love to celebrate Old Hollywood decide to award a small million-dollar movie about growing up gay and black in the 80s, where does one go next? For Chazelle, it seems the answer is something even more irresistible to the Academy. First Man is partly a biopic on Neil Armstrong and partly a recreation of the 1960s Space Race. The finished movie is so mercurial, so insulated, so dry that I found a far majority of it be kind of boring.

Neil Armstrong (Ryan Gosling) is one of the select pilots training for space. NASA is racing to beat the Russians to the moon, and every new breakthrough is thanks to long hours of hard work. Janet Armstrong (Claire Foy) worries at home, listening to every radio broadcast and wondering if her husband will come back safely.

What First Man does best is make you realize how dangerous every step of the way was to get to the moon. Every leap forward required months of trial-and-error, and sometimes those mistakes cost lives, like the crew of the Apollo 1. The film opens on Armstrong flying above the atmosphere. The emerging curvature of the Earth is beautiful, but the beauty turns to horror quickly as it appears Armstrong’s plane is bouncing off the atmosphere and drifting into orbit. There’s another sequence where he and Buzz Aldrin (Corey Stoll) are above the Earth and planning to dock in space and their capsule spins wildly and if they can’t fix it they’ll black and out and assuredly die. These moments remind the audience about the inherent dangers of the Space Race that we don’t necessarily get in the history books. Looking back, we know the American astronauts succeed in the ultimate mission of landing a man, or an eventual dozen, on the moon, but that foreknowledge produces a false sense of security. Chazelle’s movie reminds us of the enormity of this challenge and the enormity of the dangers. The sound design in this movie is terrific, and Chazelle makes sure you hear every ping, every metal-on-metal scrape, to the point that you fear the whole thing could fall apart at any moment. When Janet furiously dresses down the Mission Control head (Kyle Chandler) that tries to calm her concerns, she accuses them of being boys who think they know what they’re doing. Even after the triumph of the final act, we know what happens two missions later (Apollo 13) to reconfirm just how much we still haven’t perfected when it comes to space travel.

Besides reminding you of the precarious nature of early space travel, let alone the tests leading up to said travel, First Man doesn’t find much to justify its own existence other than as the latest in Oscar bait. It’s not exactly an in-depth look at the heroism and chutzpah of the Space Race like The Right Stuff, and it’s not exactly an examination on the frailty of man and the meticulous problem solving needed to achieve big goals, like Apollo 13. In fact, while watching this movie I would repeatedly think to myself, “Man, I should go home and watch Apollo 13 again.” When you keep thinking about watching a better movie, you have lost your audience, and that happens throughout First Man. There are thrilling, awestruck sequences to be sure, but that only accounts for perhaps a quarter of the lengthy 140-minute running time. The rest is spent at a distance trying to understand a man who comes across as largely impassive. He’s intensely focused but it’s like the movie adopts his very no-frills attitude, and it goes about its business with little thought for letting an audience into its inner world. We’re still only visitors at best here.

I admittedly don’t know much about Armstrong the man, so I can’t tell if the role was shaped for Gosling’s talents or he just matched perfectly with the man. Armstrong feels like one of the Nicolas Winding Refn roles (Drive) that we’re used to watching Gosling portray. Armstrong feels like somebody ported over a guarded, reserved, mostly silent Refn character into a staid biopic and asked Gosling to communicate a majority of emotion through unblinking stare downs. If there’s one actor you don’t want to challenge to a staring contest, it’s Gosling. Armstrong comes across a very internal man who seems uncomfortable in the spotlight, far less natural than Buzz Aldrin, who the movie unexpectedly positions as kind of a saying-what-we’re-all-thinking jerk. Because Chazelle has decided to keep Armstrong so guarded, it makes the film feel distant, like we’re being told the story second-hand, and that requires Chazelle to fill in the gaps as to the internal motivations and insights for an intensely private man. The answers we’re given seem almost cliché (the death of his young daughter is what drove him into his work, to escape the bounds of his Earthly grief, and to finally say goodbye to her). It’s too convenient as a simple character arc to be fully believed, but that’s all we have to work with because the movie won’t give us much more. It feels more like you are getting the idea of Neil Armstrong the Man rather than a realization. It’s a frustrating experience, watching a biopic and having the filmmakers keep their prized figure behind glass. 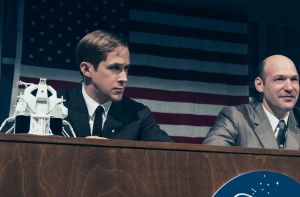 As a director, Chazelle is proving to be a remarkably skilled chameleon. First Man is completely different in style and approach to La La Land as it is to Whiplash (still his finest). His chosen approach for First Man is locking to Armstrong’s perspective, so we’re working with a lot of handheld camerawork that orbits our movie star. Chazelle’s cameras emulate a docu-drama aesthetic and there are several moments where the action happens onscreen and the cameras race to frame it, leaving the image blurry for seconds. I’m not sure that was the best decision. It does create a sense of verisimilitude, which heightens the thrilling aspects of the film like the excursions into space travel. However, it does little to heighten the underwhelming domestic drama on the NASA block. The added realism only benefits a small portion of the movie. At times, a camera racing to catch up with the onscreen action would be considered a hindrance. The claustrophobic feelings are heightened from Chazelle’s cramped camerawork, reminding us again of the tightly precarious spaces these men were willingly sliding into, the fragility of the cockpit walls separating them from an unrelenting empty void. When we switch over to the Apollo 11 mission, Chazelle keeps the attention squarely with the three men making the famous lunar landing. There’s a stirring thrill of destiny and the film transitions into an IMAX footage to make the moment that much more immersive and transformative.

First Man is much like the man of its title, reserved, guarded, and with a laser-like focus on its mission at the expense of outside drama. Chazelle is an excellent filmmaker and the craft on this out of this world, from the production design to the thrilling recreations of the dangers of space, bringing together the alarm through a sumptuous combination of editing, sound design, and cinema verite photography. Of course that verite style is also a double-edged sword, providing another layer to distance the audience. This is a pretty guarded movie with few insights into Armstrong the person. We get more Armstrong the pilot and numbers-cruncher, and I wish Chazelle had steered more into whatever version of Armstrong that opened him up to the audience. The family drama stuff is pretty pat and Foy (The Girl in the Spider’s Web) is generally wasted as the supportive and anxious wife. Most of the actors are generally wasted in this movie, with the potential exception of Gosling, who slips into the shoes of an impassive and emotionally restrained protagonist like it’s second nature. First Man might not be a giant leap artistically, and in fact a majority of the film is dull, but the artistic highs are enough to warrant one viewing. From there, you’ll likely conclude that you don’t need to watch Neil Armstrong stare forlornly into the middle distance again. Frankly, I’d rather watch La La Land again, and that’s saying something.