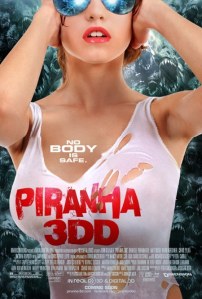 Wow, I was not expecting the follow-up to the so-bad-it’s-excellent Piranha 3D to pretty much just inhabit the “so bad” spectrum, though I ignored warning signs at my own risk. I found the 2010 Piranha to be a sheer blast of campy entertainment, with some world-class gore effects and a game cast. I was actually terribly excited about a sequel; I’m ashamed to admit it now. Where did things go so horribly wrong? Much like Expendables 2, the movie’s tone shifts from tongue-in-cheek 80s throwback to meta self-awareness. The movie becomes more of a lousy comedy with some absurd violence rather than a horror movie with a nasty sense of humor. The entire premise is so labored, that a water park would become piranha-infested, and the characters are so unlikable; to dub them one-dimensional is to be too kind. The acting is abysmal even by bottom-of-the-barrel B-movie standards. The celebrity cameos feel wasted, with David Hasselhoff soaking up every second of desperation. The tension is next to nil and the gore effects are pretty cheesy, trading gallons of blood for ingenuity (many character deaths occur off screen, like Gary Busey’s). Then once the piranhas strike, the movie just completely abandons any sense of reality and becomes a gonzo comedy of the absurd, with characters behaving like idiots from another dimension. There’s even one character that gets decapitated by a simple string of flags. It’s at this point that Piranha 3DD drops any slapped-together sense of purpose. And yet this ghoulish mess can only barely make it to a scant 70 minutes (good luck getting through the abominably unfunny end credits outtakes). Reportedly, 3DD had almost the same budget of 3D. Where the hell did that money go? Piranha 3DD completely misfires on every level, failing as a horror movie, a horror-comedy, a comedy, a gore movie, hell, as a suitable movie. Whatever the metric, this movie blows. If you’re hard-pressed for gratuitous nudity soaked in blood, watch the superior 2010 Piranha film instead. I’m going to start drinking heavily and forget I ever looked forward to this monstrosity on taste.