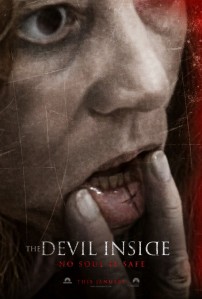 I heard all about The Devil Inside earlier this year, when supposedly midnight screening audiences were so incensed that they practically became a riotous mob, throwing items at the screen, loudly booing, some even destroying theater equipment. If that doesn’t sell this movie, then I don’t know what will. I wasn’t expecting much from this faux documentary about one pretty girl’s (Fernanda Andrade) search for her crazy mom who may or may not be possessed by demons. She enlists the help of two exorcists and a camera crew and goes searching for answers. Never mind that the movie is absent any scares outside the sudden jump variety, ignore the empty characters and nonsensical plotting and poor pacing and choppy editing, as well as some bad Italian accents, and let’s get down to what makes this movie so notorious – the ending. Just when it appears that The Devil Inside is gearing up for a climactic showdown between good and evil, just when it seems like the movie is finally getting somewhere, it ends in the most abrupt, ludicrous fashion (note to self: when transporting possessed people, stow them away in the trunk). You’re left dumbstruck, shocked that the filmmakers cheated you out of an ending. It’s a nonsensical and cheap thing to do, and I can understand why it inflamed audiences (it still made over $50 million, so I think the filmmakers are feeling fine). Only those easily spooked by demonic possession would find this movie scary. Everyone else will just find it upsetting, not because of its content, but because of its lack of a workable conclusion.