Horror is a genre that’s been notoriously cannibalistic, especially as of late. I don’t mean flesh-eating, I mean the glut of remakes that has polluted the horror market in recent years. After remakes of Halloween, A Nightmare on Elm Street, Friday the Thirteenth, The Hills Have Eyes, House of Wax, Prom Night, My Bloody Valentine, The Amityville Horror, The Fog, The Texas Chainsaw Massacre, Black Christmas, Sorority Row, Dawn of the Dead, The Crazies, Don’t Be Afraid of the Dark, I Spit on Your Grave, Last House on the Left, The Thing, and scads more, you’d be forgiven for believing that the remake of 1985’s Fright Night would be another soulless cash grab. It turns out that it’s way better than even the original and quite an entertaining movie that got lost in the shuffle.

In a quiet little suburb outside Las Vegas, students are going missing. Ed (Christopher Mintz-Plasse) suspects that there is a vampire in town. Ed’s former friend, Charley Brewster (Anton Yelchin), dismisses this idea, especially since the would-be vampire in question is his new neighbor, Jerry (Colin Farrell), a home construction worker who seems to work at night mostly. But lo and behold, after Ed goes missing, Charley concludes that his old friend was right all along. Jerry has his eyes set on Charley’s single realtor mom, Jane (Toni Colette), and maybe even Charlie’s sprightly girlfriend, Amy (Imogen Poots). The only ally Charley can muster is a drunken Vegas magician in the Criss Angel tradition. Peter Vincent (David Tennant) has been studying vampires for years due to his tragic personal connection to vampires, notably Jerry. 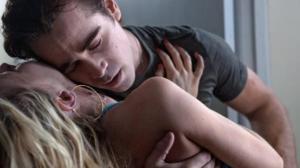 Fright Night finds that horror sweet spot, equal parts scary and funny. Credit screenwriter Marti Noxon who cut her teeth on TV’s seminal show (yeah, I said it) Buffy the Vampire Slayer; there’s even a reference to a “Scooby gang” for we Buffy fans. Noxon does a terrific job of establishing a suspenseful situation and then developing it nicely, teasing it out. There’s a sequence where Charley is trying to rescue a neighbor lady that just involves a series of hiding places but uses a simple setup of ducking around corners so well. When our plucky protagonist checks in with Vincent for some assistance, we’re introduced to an array of exotic vampire-hunting weapons and artifacts that the Vegas magician has under glass. With a setup like that, you better believe we’re going to be using those weapons later, and how. The character development is richer than most teens-battle-monster genre films. The relationship between Charley and Ed, and the awkwardness and resentment of two friends growing apart, feels rather believable even dropped into the middle of a vampire adventure. The standard girlfriend role is given a bit more weight, as she’s the one who feels confidant and aggressive. She knows what she wants, and as played by the adorably named Imogen Poots (Solitary Man), you want to be what she wants. Seriously, this actress is striking in her Grecian features and I like a woman who knows how to handle a mace. There are also small touches that I really enjoyed that helped round out the movie. At one moment, a woman is being fed on by Jerry and she spots Charley hiding behind a door. Rather than cry out for help, she carefully draws a shaking finger to her mouth, wishing him to keep quiet and not to save her. The resolution of this rescue attempt is shocking in all the right ways. It’s a surprise that feels completely within reason, and organic twists and turns are always the most satisfying.

Noxon’s script continually surprises even when it starts to follow a by-the-numbers plot. Instead of an axe lopping off a vampire’s head, it just goes about halfway through thanks to the rigidity of bone. That’s a nice touch, but then when that same vampire tries to bite our hero and can’t move his fairly severed neck closer, then that’s when Noxon has capitalized on her cleverness. And she capitalizes often enough for Fright Night to be a real step above most vampire action flicks. Noxon also finds clever spins on vampire mythos; to get around the whole can’t-enter-without-an-invitation rule, Jerry just attempts to blow up the Brewster’s home to drive them out (“Don’t need an invitation if there’s no house”). There’s a particularly ingenious method to light a vampire on fire. And the entire character of Peter Vincent, played brilliantly by Dr. Who actor David Tennant, is a hoot and a great addition. He’s a riot as a cynical, profane, and selfish stage performer.  His character is such an enjoyably comic foil, and Tennant plays him with aplomb, that you almost wish for a Peter Vincent spinoff movie.

Director Craig Gillespie shows that he is shocking adept when it comes to staging a horror film. I would not have expected this level of competency from the director of Lars and the Real Girl. It embraces its R-rating and the bloodshed is plentiful though the gore is restrained. Gillespie draws out scenes with judicious editing, letting the dread build steadily. The tension of something simple like Jerry standing in a doorway, waiting for any verbal slipup to come inside, can be terrific. Gillespie also has some nifty visual tricks up his sleeve to complement Noxon’s crafty screenplay. There’s one scene where Jerry walks into a hotel lobby and is confronted by a security guard. The camera pans over a series of security monitors that do not pick up Jerry. Then in the background we see Jerry hurl the guard to the ground to bite him and in the foreground we see the security footage minus Jerry. There’s an ongoing tracking shot inside a fleeing minivan that’s not exactly Children of Men but still a good way to feel the fever of panic. The final showdown between Charley and Vincent versus Jerry is suitably climactic and rewarding, nicely tying back elements that were introduced earlier and giving Poots an opportunity to vamp out, literally and figuratively.

Farrell (Horrible Bosses) is a charming, sexy, alluring menace as Jerry, which is exactly what you’d want in a vampire (sorry Twilight fans). Vampires are supposed to be seductive; they’re inherently sexual, what with all that biting and sucking and sharing of body fluids. If Jerry is going to be dangerous, he also has to be seductive, and Farrell is exactly that. With his swaggering walk, with his pose-worthy stances, with his grins, he’s a great ambassador for vampire kind. But this guy does more than preen; he’s also a credible threat. He’s the bad boy that is actually quite bad. Farrell’s enjoyment of his villainous role is noticeable. Jerry taunts Vincent: “You have your mother’s eyes.” He shoots and misses the big bad vamp. “And your father’s aim,” he add, chillingly. Having a strong villain can do wonders for an action movie, and Jerry is a formidable foe played with great relish by Farrell.

Not everything goes off without a hitch. The special effects can be dodgy at times, especially when Jerry goes into full CGI vampire face. The vampires tend to look like shark people, with long exaggerated jaws and rows of gnarly teeth. It’s not a particularly good look. While Noxon’s script excels in most areas, there is still enough dangling plot threads. Charley’s mother is really never a figure of significance. Her potential romance of her neighbor/vampire is a storyline that is never capitalized upon, oddly enough. That seems like the kind of storyline you’d build a whole movie around. She’s written out of the movie in hasty fashion, immediately going from a sequence of driving to being unconscious in a hospital bed. How did that happen exactly? After the Brewster house explodes, nobody seems to make a big deal out of this, like it’s just some regular neighborhood occurrence. What kind of neighborhood watch is this?

Fright Night is just a fun night out at the movies. It’s got plenty of laughs thanks to Noxon’s clever script, plenty of scares thanks to Gillespie, and plenty of sex appeal oozing from Farrell (though “sex appeal” and “oozing” don’t sound like an advisable linguistic match). It’s not much more than a vampire action flick but it’s a really good vampire action flick, clearly a cut above the dreck that usually just relies on its audience’s understanding of genre convention to cover up for its shortcomings. There’s no reason you cannot be a good movie with this genre, and Fright Night is proof of that. Convincingly acted, cleverly staged, and surprisingly well-executed, this is one genre movie that hits the right vein.