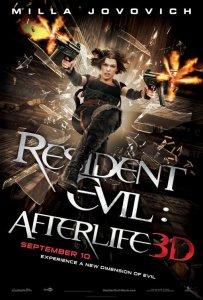 I won’t pretend these movies are anywhere close to good, but each one has provided some mild, mindless thrills. However, the fourth film in a franchise going nowhere is the first of the series that just says, “To hell with trying to be even remotely real.” This is a living video game, especially the opening sequence where it’s a nonstop barrage of self-conscious visual tricks, hails of bullets, gore, and a general kick in the balls to the laws of physics. I’m not asking for much, but I’d like my mindless violence to be of a quality where it doesn’t feel 100 percent gratuitous and, frankly, boring. If every single scene involves someone doing something fantastic, over-the-top, and absurd, then where can my interest go but down? Director Paul W.S. Anderson returns to the series he begat in 2002. Get ready for more zombies, more weird mutant creatures that will act however they damn well feel like, and more Milla Jovovich confusing toughness with cold stares. The action is ripped purely from a video game with no regards for geography, setup, tension, development, or anything that would matter. It’s just all flashes of violence one after the other. It’s a mostly depressing enterprise. But where do they go from here? The second movie was subtitled “Apocalypse” (little too hasty there), the third “Extinction,” and now this one is subtitled, “Afterlife.” Is the next one going to be, “Reincarnation”? And the certainty of a fifth movie only adds to my depression level.